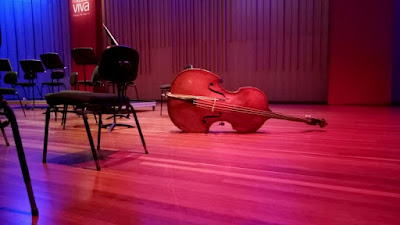 From the first phrase I knew this was fabulous. It was the Orchestra of the Age of Enlightenment playing for Musica Viva in Llewellyn Hall. I don't usually attend Musica Viva although I know they are very good, but this was OAE and they are renowned and it's something I do. And some great seats were surprisingly reasonable for a renowned group of 20 touring from London. But back to that first phrase. It just sat so nicely and its internal movements were just so unified. That's dynamics and playing together, as well as all the obvious things like intonation and chops. It was like the whole just breathed; not that they breathed together but the group breathed as one. In the end, I decided it was relaxation and quiet. They relaxed, so the group could sit then attack together, or wait for a lead, so the conversation was open and obvious. I just once felt one instrument anticipate. Lesser mortals do it all the time - it's a nasty habit to speed up when you're less comfortable. And they played the quiets, so pps had you in your seat, and p was common and mf augured and ff blasted and Llewellyn was full with no excessive volume. As for the chops, they were just assumed. The quavers doubled to semiquavers in a wink with no hint of hesitation; the intonation just sat, sweetly. The leadership was often subtle, often just obvious, tips and bows and smiles and frowns.

Rachel Podger was director and soloist for two Mozart concerti (vln conc no.1 Bbmaj K207; von conc no.5 Amaj K219), most obviously wearing white to the others' black. She stood centrally to others' sitting for the concerti, but stood as concertmaster with the others for the symphonies (Haydn symph no.26 Dmin; JCBach symph Gmin op.6 no.6). And she was playful. Nodding and smiling, looking openly to the audience and often glancing or prompting or swinging with the others. They had music on stands, but they were reasonably free from it. The horns were baroque and they had hooks on music stands for different insert tuning tubes. The celli, bass and bassoon sat throughout. The bass was 4-string and the cellos were pegless. The oboes and bassoon were baroque and the strings were gut and the bows were period. What else? There was a joy in milking notes and phrases, with delightful intent. There was an odd dissonance somewhere in mvt.3 Mozart K219 (I'm sure it was written) and what only seemed like slap bass bow (?!?) also in that movement. The horns could be luscious; I hardly noticed the bassoon except when I listened for it; I was amused to see one baroque oboe player looking to the gods with a reed in his mouth. Just fabulous. Going out after was just confirmation. Fellow musos claiming it's the best or unbelievable. I just thought back to Berlin Phil and how it seemed not so much great as just so right. This is the other time I've experienced that. Music that flowed with feeling and joy and purpose and had you leaning in your seat for more, for detail, for joy and conversation. Not Berlin this time, but London, here in Canberra sadly for just one night. Just fabulous.

PS. That "Slap bass bow" was probably "con legno", something new to me that I have just discovered in the Honegger cello concerto and that I will be playing with NCO in a few weeks. / Eric

We loved this concert too. A really lovely crowd-pleasing end to this year's season.