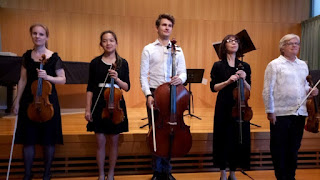 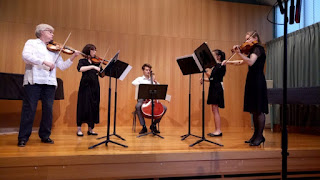 Barbara Jane Gilby introduced the Mozart by saying we should ignore the images and pre-conceptions of Mozart, formed by film, TV and the rest, and listen to his music. That's how we'll best know him. They were about to play Mozart String Quartet no.4 Gmin K.516. It was written late in his life. Things weren't going well and his mood was sombre. Barbara's notes observe that the introduction to the fourth and final movement summarises his melancholy, but that the listener is finally sent away in a happy frame of mind. Also to note was Mozart's contrariness, so this work was written in five voices as in the Baroque, despite most German writing of the time being in 4 voices. Whatever, this was a strong concert out of the CSO and some younger performers, not least Sarah, just 15 , in her first performances on her second instrument. And mozart is always so pleasurable that you can sink into his comforting melodies and just indulge and so I did.