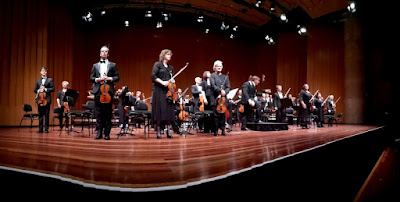 I found the latest CSO concert hugely satisfying. First up, Glinka Ruslan and Lyudmila overture. It a lively thing and joyous thing with plenty of fast runs and the five basses handled it with ease, as did the other parts. I've played it, but it couldn't have been so fast. The next up was the feature, soloist Harry Bennetts playing Tchaikovsky Violin concerto Dmaj Op.35. HB is ridiculously young, early 20s, but scholarship material at the Berlin Philharmonic Academy, so no slouch. This was fiery with huge technical demands, harmonics into the stratosphere and the rest. It was a hugely impressive outing by a very young but capable player. I've played that, too, with John Gould as soloist in Maruki. Apparently Maruki had done the other, too, although I haven't. Sibelius Symphony no.2 D maj. It's a sprawling work with beastly timing for all, some stunning long, fast walks in the cellos, rich and vibrant and emotive, pastoral and melancholic and stirring. I loved this one not least for its exhilaration and the orchestra did it proud. So a hugely pleasurable evening.