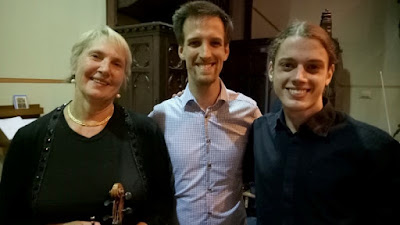 Someone asked me recently if any of my bands toured. Only Musica da Camera, which pairs Canberra concerts on a Saturday with Sunday concerts in a local town. This weekend we played the music of Mannheim, ie, early classical, under Christian Renggli and with viola soloist Justin Julian in Cook then in Goulburn's Catholic Cathedral with its presence and acoustics and it was especially satisfying. It was a magical performance (excuse me if I say it myself).

The dynamics just melded together, the pace was relaxed so those difficult passages didn't race away as they can do, the intonation was shared and sweet, the various parts became more evident and the whole just sat. A great pleasure and obviously what this art aims for, but which can be elusive. From the program, "the Mannheim School refers to both the orchestra techniques pioneered by the court orchestra of Mannheim in the latter half of the 18th century and the group of composers of the early classical period who composed for the orchestra". Thus we learnt of the Mannheim crescendo, the Mannheim rocket and roller and sigh and the Grand Pause. And for the second performance, especially, they took on real life. Christian had gathered the program: two sinfonias (Gmaj and Ebmaj) from father of the Mannheim School, Johann Stamitz, a viola concerto (Dmaj) and an orchestral quartet by his (real) son Carl Stamitz, and a sinfonia (Gmaj) by FX Richter and sinfonia (overtura, no.1) by Franz Ignaz Beck. Justin Julian of the AYO and Sydney Con and more played a compelling performance on the concerto as well as sitting in for the viola section in the second half. It just all settled to a level of expected comfort so the pps were seriously quiet so the audience sat forward and those long crescendos didn't run out of puff. We felt chuffed and I wasn't uncomfortable that we got a standing ovation. This time, I felt the playing deserved it. So, something to watch and listen on my recordings over Christmas, but plenty more performances to come, in various orchestras and with Tilt. This is fun.

Now on YouTube! You can now view this Stamitz viola concerto and Stamitz symphony Eb, both recorded at Goulburn, on YouTube. Search "Musica da Camera Canberra". We can't find recordings of the Eb Symphony on a string of major sites (YouTube, Naxos, Spotify) so it may be a premiere.