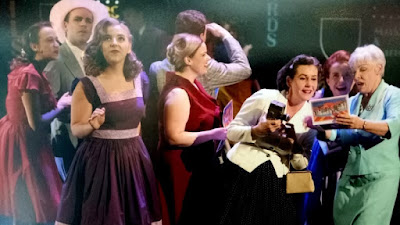 How incorrect can you get? It's massively out of era, but I loved it. It was Guys and Dolls, the musical from 1950, performed by the Queanbeyan Players. Amateurs, perhaps, but with some seriously good singing, some decent dancing, a capable band, huge commitment and lots and lots of performers. It's not something you'll see with the profs these days because they can't pay for it and keep the ticket prices reasonable, but the amateurs can have 40 performers on stage, plus a band of 25 musicians, also on stage, and everyone's loving it. This was the final performance of the season, so the preparation was evident and the enjoyment was rife. And the music and book, all great. I'd listened to the sound track before and it didn't particularly click, but with the story and characters presented live, it all worked. G&D was released in 1950 and would have won the 1951 Pulitzer prize for drama but for writer Abe Burrows having troubles with the House Un-American Activities Committee and Columbia University vetoing the selection.

In the end, there was no Pulitzer for Drama for that year. G&D is the story of Nathan Detroit, local Craps promoter, and his lover of 14-years, always soon-to-be-married, Miss Adelaide, bar singer. And in parallel, Sarah Brown, Broadway Salvation Army sergeant and her to-be beau, Sky Masterton, superior gambler. It's a story of its time with dark shades to feminism, but it's got essential truths amongst the period romanticism. The music is great; the characters and the story work. Perhaps except that it ends so suddenly and strangely unsatisfactorily, when Sky, in a totally unlikely, sudden and unexplained twist, joins the church. But there's a certain humanity here and that's important. I loved it. The players performed with gusto and plenty of serious capability. And it's not a lightweight outing: including interval, it lasted 3 hours. A fabulous outing that I'll remember. Just another example of the very capable and productive local non-professional theatre around here in Canberra.