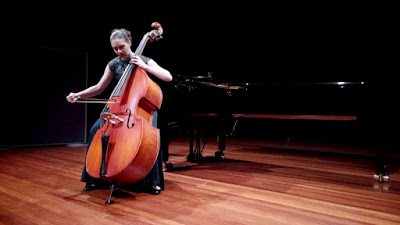 The minutes leading up to Hayley Manning's graduation recital had me perplexed. There were a string of bassists and a tabla setup. Ben and Kyle on each side of the stage with a tabla player between. Geoff and Brendan were down the back on bass, something I only realised later. At the starting time, Hayley arrived upfront to play a freeform melody by Francois Rabbath against a low-E drone from the other basses. They left and Hayley introduced the next works as more conventional. Misek Sonata no.1 Amaj and Koussevitsky Concerto F#maj, both played with piano accompaniment. These are not trivial works and F# is not a trivial key. I was in awe of Hayley's thumb positions, harmonics, long scales and the like. Technical challenges abounded and she did them justice. Then the final work, Anderson Capriccio no.2, a contemporary bass work played solo, with a "flurry of rhythms notes that display the full raw power and potential of the double bass as a solo instrument" (from the program notes). How apt: this one worked for me as a bass solo piece. It got me thinking of the role of bass. The Rabbath was effective, where the bass was being itself. The Misek and Koussevitsky were impressive, but I kept feeling the piano just said more and more interestingly with its handfulls of notes as chords and arpeggios and that easy dexterity, so why the solo bass? But the Anderson was my favourite, toying with the low pitch, the upper reaches, the grandiosity with clumsiness that is the string bass. In parallel, it reminds me of my readings in Bass Player mag, where they continually rile against overplaying, perhaps clumsily, by repeating that the bass is there to make others sound good (!). I guess they mean that its role is essentially accompaniment, especially by spelling rhythm or groove. The Anderson took a prime role for the low end and made it interesting, not least by using rhythm, but mostly this observation is right in my book. Play less, play neater, play with awareness of others. It's harder than it sounds and it's not an impediment or limitation. Nothing makes drive like a bass line, in funk or in classics. With instruments, it's horses for courses. So congratulations and thanks to Hayley for her graduation and her thought provoking recital. 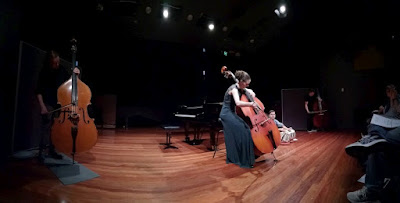