Clear(l)y a long way from Kent 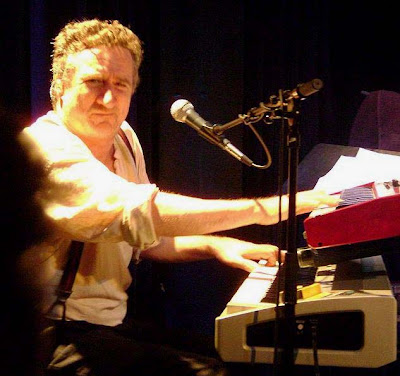 The pic is Jon Cleary performing at Treibhaus, Innsbruck, 2008. Thanks to Svíčková for releasing the pic into the public domain at Wikipedia Commons.

Despite the threat of rain – and it being a Monday – the intimate upstairs lounge of the Macquarie Hotel in Sydney was full to capacity for Jon Cleary’s vibrant and smokin’ piano. Touring down under from New Orleans, Cleary clearly knows how to get an audience swinging and foot-tapping. He combines blues and boogie-woogie, with nods back to classical virtuoso technique and forwards to the straight minimalism of pop, all the time retaining the sincerity and spontaneity of rhythm and blues and soul.

Jon Cleary was born in Kent, England but spent 20 years immersed in the life of New Orleans. Outfitted in flat cap, jacket, beige pants and sunnies, Cleary looked like he could play anywhere from a back alley pub or up-market restaurant to a 1930’s bordello. His playing is robust and his lyrics are heartfelt, philosophical and optimistic, touching on love lost and won and the gritty soul in urban life.

This was a solo performance where the performer has to draw all inner reserves of strength and rhythm to keep the collective foot tapping. Cleary had the energy and attitude to make it look all too easy. The rhythmic intensity of his playing and conviction indicates a lifetime of love for the old-school rhythm and blues.

His strong bass lines underpin tinkling blues rolls at the upper end of the keyboard. Often his hands are spaced over a metre apart as he pounds his bass lines with no thought of register, while playing dancing blues riffs with the right hand. The “no fear” approach in the bass brought out the full richness and sonic depth of the baby grand at the Mac and showed that the lower notes of a piano are meant to be played, not just occasionally stroked. He pushed the piano to the limit and it swayed and bobbed he percussively struck swinging blues notes over his solid 1, 3, 5, 7 walking bass line.

Some mid-piece adjustments of tempo were required to keep the feel and pacing steady – and to possibly accommodate the difficulty of some the passages, letting off a bit of the steam. His playing was never needlessly virtuosic. Instead, Cleary uses his instrument to evoke an era when rhythm and swing were more honest and the gap between audience and player was closer.

Cleary had remarkable stamina. He played one set that went for about 1 hour and 20 minutes and then gave an encore, finishing with Blueberry Hill. He must have strong hands to execute the trills and continuous three and four note riffs in the right hand with total fluency. Sometimes the left hand would follow its counterpart up the piano until they were both so high that it sounded like the splash of a thousand raindrops on a crystal pane. Then the two hands soared back down, chasing each other as if possessed by Rachmaninov. The crowd enjoyed these forays into the middle and upper-registers. Cleary’s hair raising chromatic chordal descents were a melange of harmony, and yeh they swung. Every set-play that Cleary executed was greeted by cheers and yehs!

The 80th birthday of Fats Domino was commemorated with a rollicking salon piece. Cleary had actually attended Domino’s party and remarked that he still played as if he was 50 years younger. Special mention was also made of Jelly Roll Morton.

In contrast to his energetic playing style, Cleary’s demeanour is laid-back yet engaging. He sometimes seemed lost in his world, doing his thing, singing his songs; occasionally he would glance at a couple of front-row audience members to ensure they were still having fun or hadn’t nodded off – surely an impossibility with this piano rocking music.
Posted by Eric Pozza at 7:43 pm