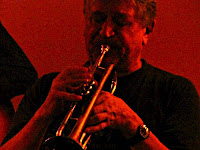 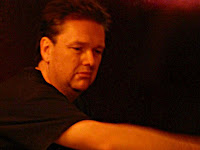 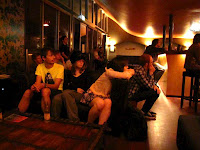 It’s good to see Trinity open again for jazz. The hiccough of the Tuesday closures lasted a few weeks; now the music has returned on Wednesdays. Miro fronted a band from the Jazz School for the first night of the new series. It was an informal gig and the audience was mostly the Jazz School family (John observed this with a chuckle at one stage). The new year of students is presumably keen to get out together. I only caught the first set. They played three tunes but the soloists filled the time. The first tune was a vamp on D, then Miro’s infectiously melodic Delicatessen and a blues in a Bitches Brew jazz-rock groove. Miro started melodic, where notes and intervals were distinct and purposeful, but seemed egged on by John to a more flourished, speedy style. From the top, John laid down showers of notes of variously dissonant harmonies. If anything, he went the other way from Miro and calmed his later solos. I always hear his dissonance, but I know he likes to play inside. (Am I hearing extensions as dissonance? Don’t think so.) I enjoyed Andy’s chordal work, where he moved textures behind the players. It’s an essential role, if reclusive. It’s wonderful when a rhythm section lifts beyond repetitive chordal work into changing colours. Chris’ thumpy, syncopated sound makes him both the essence of a bassist, and contemporary to boot as he blends repeating lines with improvisation. Mark has a relaxed presence in an outing like this. His grooves were rock steady, although with offbeats and sharp features, and the solos were full of irregular rhythms that just fell into place so as to become inevitable after the fact. I enjoyed hearing some of the local masters out again. I haven’t caught them quite so much recently. Remember, Trinity now on every Wednesday: reliably good music, good scene and cheap beers.