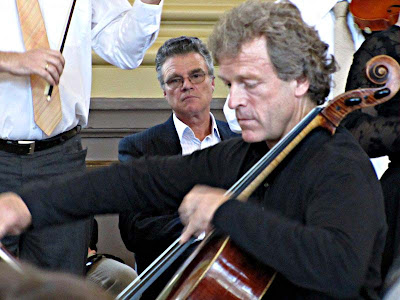 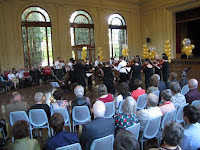 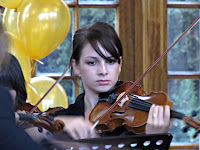 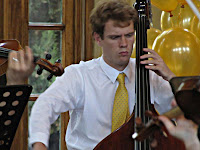 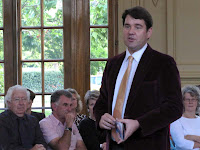 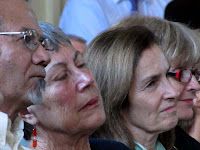 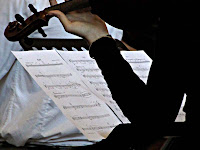 Megan and I got an invitation to the launch of the Canberra International Music Festival 2010. This year’s launch was at the Albert Hall, one of Canberra’s earliest public buildings (meaning ~1920s). It’s a small, timber floored, multipurpose hall in a Georgian Revival style with faux classical columns, big windows, a strange little dress circle area over the foyer and a proscenium arched stage. All quite a mixture and odd for modern tastes, but it’s much loved and has been recently restored (although I didn’t notice much difference). There were drinks and hors d’oevres, followed by speeches by Dorothy Danta (Pro Musica Board president), Don Aitken (CIMF Chair) and Chris Latham (CIMF musical director), and the premiere performance of a work by Peter Sculthorpe, Kyrie for cello and strings, performed by cellist David Pereira and the ANU School of Music Chamber Orchestra. Megan described it as dreamy, evocative, wandering music that reminded her of Arvo Pärt. It was nicely played, too, although the massive reverb in the now curtain-free Albert Hall made the orchestra sound less fresh than it should have. We discussed the lack of curtains with some friends. They would have served several purposes in this reverberant hall with big windows in Canberra’s harsh outback environment: managing the sound and limiting extremes of temperature. I bet they will reappear. It was not a young crowd. The ageing of the audience is a concern of classical music. I hope the seriousness of the music will work its magic in the end. There’s just a touch of jazz on the program but it looks interesting: the Sprogis/Woods Jazz Composers’ Competition. It’s advertised as an award for emerging writers from the Jazz Department at the ANU School of Music. Bill Risby, Miroslav Bukovsky and Mike Price are judging. The final is in the Fitter’s Workshop (the venue with the “Stradivarius acoustics”) on 23 May. Check out the CIMF website for the program.

Ah good for you. We got an invite too, but too much to do. Sounds as though it was good to go to. I like the CIMF but never get to as much as I'd like to

BTW YOur CIMF link didn't work for me. I needed to add the www in. You might like to check it.