Sandy Evans returned with the Sydney Women’s Jazz Collective last night at the Gods. Sandy was loosely identified as a leader, but convenor would be a far better term, because this was truly a collective effort. It’s evident that they play together often enough, because there was a level of ease and informality that carried the night over with occasional chuckles and a sisterly good will, but they are not a formal band. Nonetheless, there were some original tunes that I felt were pretty intimately known by several members, such as the shared vocals in tunes by Zoe and Jess. Maybe they use the tunes as platforms at the SIMA Jazz Workshops for Young Women where they have all taught. 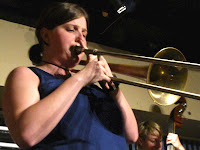 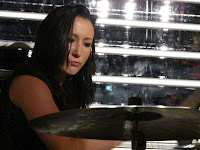 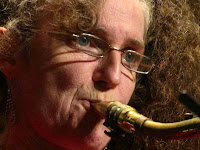 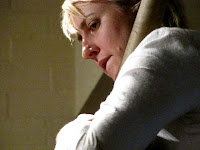 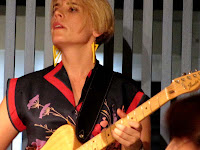 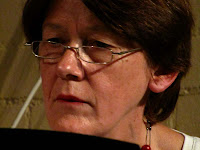 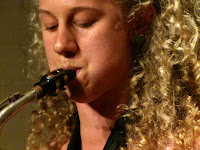 The good will on stage was both infectious and pretty unusual. Sandy exudes familiarity and supportiveness and it obviously carries over, with Jess bopping to the rhythms, and good humour all round. But musically, the collective label was also clear. Sandy introduced the band, but promptly passed the mic to whoever had penned the next tune for its introduction. There was that added familiarity of each muso talking to us so we know them as more than just performers. We felt knew these players as we know someone in a café rather than someone on stage: it’s a generalisation, of course, but women are good at that and I reckon it holds the world together. And the styles were very different. Jess with her intimations of Scofield; Zoe with her jazzabilly and pirate songs (“every band should have a pirate song”); Alex reincarnating hard bop in the tradition of Blue Note and Sidewinder sessions; Monique with a lovely bossa with those twisted chordal cycles and slightly unexpected intervals we hear from Brazil; Sandy with her searching modern style and stunning soloing. I was also taken in the second half by several pieces with vocals. It wasn’t song and it wasn’t scat, but vocal tones sung by Zoe and Jess (and others?) in harmony with each other and with instruments. It worked like a harmonised horn melody, but sounded very differently: intimate and clear and bell-like with the high female voices.

The playing all round was capable and professional. Sandy’s solos were all stunning: apt for the style of tune, clear analysis of the chordal structure, and flowing melodic statements. But not soft or easy or relaxed: she always seems to be testing herself, at the hard edge of her creativity, giving all. I’d just heard her latest CD, The edge of pleasure, with Brett Hirst and Toby Hall, and you hear it there too. She’s well renowned and with good reason. Jess is another identifiable soloist: a fabulous, edgy Telecaster tone that she uses for thoughtful, sharp soloing. She’s not a shredder, despite occasional fast runs, but these are solos built with unapologetic tone and unexpected intervals. The tone says blues emotion, but the concept says jazz thought. And she digs the music, too, bopping freely to the beat. Alex was typical trombone. It’s not the slashing instrument that sax or guitar is, but the slide seems to enforce a considered awareness of harmony for heads or melody for solos. It’s she of the hard bop tunes, and there was that vibrancy and simple joy in her style. Sandy joked that she and Monique had done their jazz studies together, “when was it, 1876?”. I particularly enjoyed Monique’s bossa. Piano lends itself to an ear for chords at a profound level, and this tune clearly displayed it. Zoe was her eminent presence on bass and in person, if a bit soft (Acoustic Image amps are true to the acoustic tone, but there's little punch or presence). She was always involved and propulsive in her bass accompaniment, did a lovely solo, and I love her quirky country-rockabilly take on jazz. Drummer Ali was less revealed than the others given she didn’t provide a tune or introduce one. But it was a capable performance with an outspoken solo later in the night. She’d played admirably quietly earlier on, so this took me back a bit. It shouldn’t have; after all, she is a drummer. Finally, a sit in. These players actively support young female jazz performers, so it’s not at all surprising that one of Sandy’s Canberra students, Stephanie Badman, sat in on alto to perform Sam River’s lovely ballad, Beatrice. 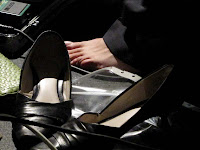 Women aren’t so rare in jazz these days, but women’s jazz ensembles are, so this had a bit of the sociological as well as the musical. Add that it was also a fascinating trip through a wide variety of jazz styles and an affable interaction with the musicians, and you can see why I found it such a wonderful outing.