The Steinways were in town last night with a show I couldn’t resist. The famous piano manufacturer is now represented in Australia by a company called Exclusive Piano Group. EPG brought the replica of Steinway #1. It’s a very close copy of the first piano built by Steinweg in his kitchen in Sessen, Germany, even down to timbers from the same woods. Steinweg immigrated to the US, changed his name to Steinway, and established the eponymous piano company in 1853,and the rest is Wikipedia history. 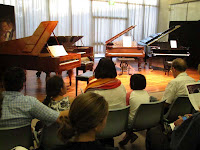 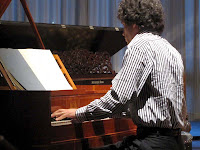 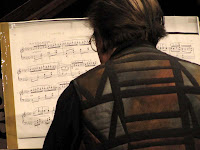 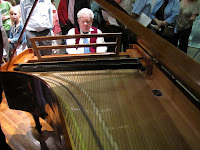 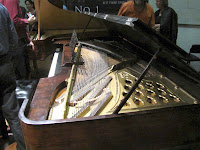 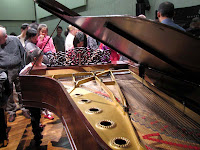 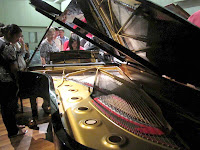 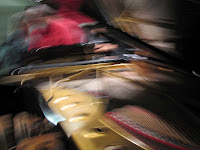 There were four pianos on display for the event: the Steinway #1 (1836), Steinway Square piano (1877), a Steinway grand of the Wagner period (also 1877) and a modern 9’ Steinway concert grand. It was a fascinating comparison and a tour through the history of the piano. On board were two expert pianists from the ANU School of Music to demonstrate the differences: Arnan Wiesel and Larry Sitsky. Annan played a JS Bach partita and some of Schumann’s Scenes from childhood variously on the #1 and the Square. I was taken by the Bach, which seemed to have more rubato (more romantic?) and than I expected from a baroque piece, but then I’m untutored in these things. They were certainly delightful pieces and touchingly played. Larry played an Australian piece, Roy Agnew’s Sonata ballade (sonata no. 3), and a Dvorak that you couldn’t help but recognise. I loved the Agnew piece: more modern, some dissonance, less obviously tuneful, more unexpectedness. Larry also improvised in the mix between the Agnew in A and the Dvorak in Gb. Apparently it was old habit of pianists to improvise when changing down keys. It wasn’t long (I recognised the new melody after about 20 bars) but it was an interesting and unusual practice amongst modern players, and one that makes a (tenuous) link with jazz.

But how did they sound? I first thought the #1 sounded old and somewhat “out of tune” to my ears. Obviously it wasn’t out of tune, so I read this as a more mushy sound with less clarity, less volume and power, less precise resonances and more mid-rangy. It had a Moderator pedal which changed the sound hugely, to sound like some older synth pianos. It also had a simpler looking frame, without the cross stringing of the other pianos. The Square and the Wagner were more of a similar sound and somewhat midway between the #1 and the modern instrument. A bit louder, still less sharpness than a modern piano, still not crystalline. The modern Steinway 9 foot concert was the sound we now associate with piano concerts. It was sharp and precise, loud and hugely dynamic, absolutely clear is its resonances, and with a trebly sound that suggests to me that we are hearing an expanded harmonic range. I could understand that people might find this tiring or even so precise as to be lifeless. But what a fabulous instrument! Whatever your preferences, you can only admire the current instrument as a work of beauty and delicate but muscular precision. The earlier piano made me think of early jazz recordings, from before WW2, but I’ve even felt this with some Miles recordings of the 50s. The pianos sounded more brawny, often a bit honky-tonk. I had thought this was the recording or the quality of piano, but it may also be the style or age. BTW, Arnan spoke of the #1 as “more transparent”, smaller, subtler than a modern piano. Larry spoke of the older pianos as more mellow, with gentler attacks, more “gradient”, and a different “blend”. I think it was Larry who described the #1 as a “combination of the light Viennese with the more robust English sound”. Very interesting and worthy of more discussion.

Steinway has been touring this piano history since 1988 and it’s now passed though Canberra, but I understand EPG will be setting up a site here, so there may be future opportunities to check out the Steinway sound around town. Larry Sitsky and Arnan Wiesel performed on the various pianos.
Posted by Eric Pozza at 12:48 pm