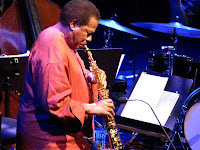 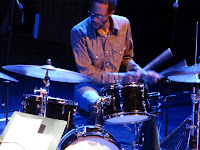 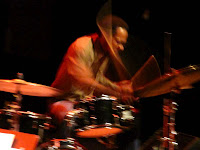 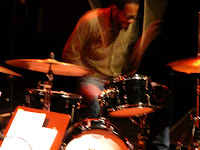 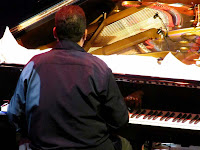 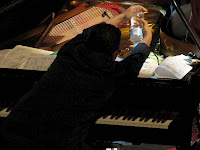 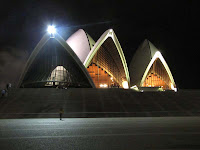 It was rains and storms and mayhem the day Wayne Shorter was to play at the Sydney Opera House. We’d planned to drive up for the concert, and left with plenty of time for a leisurely drive and meal. But the 3 hour delay outside Goulburn set us back. We almost turned around, but we carried on with hope and dogged organisation and arrived just before 9pm at the Opera House. People were milling around. There was time for a toilet break (strangely, the guys were lining up: jazz must be a male domain) and a beer and then the bells calling us in. We’d missed Matt McMahon, but we were on time for Wayne, and that was a thing of wonder.

So was the concert. Just one 90 minute set and a short encore of moody and deeply communicated music. The sound of both soprano and tenor were obviously Wayne. You could hear his improvs from the Weather Report era. Same tone, same busy lines reaching to the heavens. The back line was different, though, as were the compositions. These were moody and mercurial numbers. We three felt that pianist Danilo Perez was the lynchpin in leading the band. His style was a broad amalgam, not just jazz, but of more classical approaches. Asanka was reminded of the big bass notes of Franz Liszt. Solos were often built from structured sequences through keys. And there was complex repetition underlying the tunes which defined and guided, with some latin influences and montuno-like repetiveness. He was looking about widely, as were both John Patitucci and Brian Blade. This was a band with constant communication. You can see it in many of the pics – glances and pauses. John was every bit the master I expected and then some. A tone that was full with a nice edge, wonderful classical technique with (French) bowing and intonation and delicious vibrato, solid playing with fills that were so fast and so light and so correct. Looked like he was another big man who fitted the big bass, and with plenty of energy. But the prize in the energy stakes has to go to Brian Blade. What a powerhouse! A broken mallet followed within seconds by a broken stick raised delighted applause from the audience. He’s a lithe guy on a low kit. You could understand his diminutive frame, given the workout he endured. There was no end to drama and fervour and even frenzy in his playing. It could have got to be too much, but it didn’t. It felt right, although I think I caught some chuckles from John on stage at one time. This was not steady beats, but explosion and recovery and explosion again. We recognised only one tune, A child is born, which finished the formal set. Otherwise, it was presumably Wayne’s current repertoire of compositions. He’s renowned as a composer, after all.

The sound was poor at the start, so poor I wondered if they’d done a sound check. The Steinway was honky-tonk; there was just sax and piano, little bass except in quiet passages, and virtually no drums at all. We were off to one side so I wondered if we were getting the left stereo feed, but it got better. Quite good, actually, for the venue. But I lost the bass throughout when it got loud, and the piano and sax still seemed overly prominent. For this was a band of equals, truly a performance where everyone had a place, and pretty consistently on the frontline. Busy, moody, virtuosic and wonderfully communicated. Great concert.

Sounds like it was well worth the long drive Eric. Love your review - even I can understand it and get a sense of what you experienced.