Roil not my ales 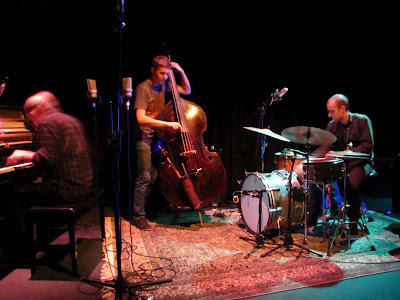 They tell me there’s a TV ad for Coopers ales that has the bottles rolled by a bartender before opening. It’s an ill-informed service that I’ve struck several times recently. In my book, rolling just gives you a turbid drink by stirring up the sediments. Sediments are for filtering, not drinking, even if marketing agencies suggest otherwise. I’ll have my bottled-brewed beers unrolled and thus unroiled, thanks. But that’s no comment on the band, Roil, that featured at hellosQuare’s event last night at Street Theatre 2. 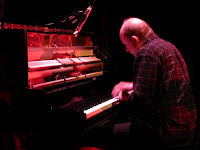 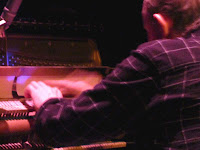 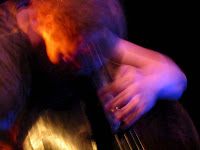 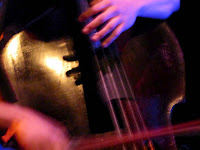 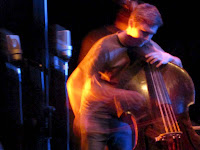 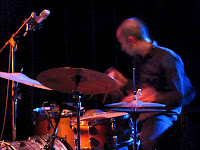 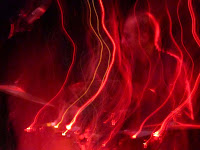 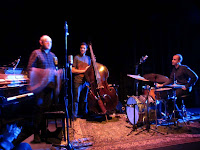 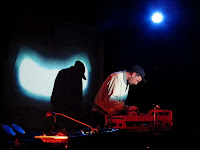 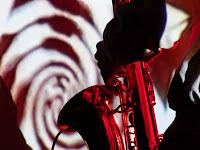 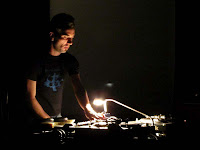 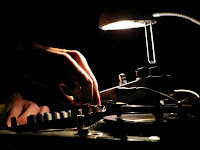 Roil is a piano trio comprising Chris Abrahams, pianist of the Necks, with Mike Majkowski and James Waples. This in another band in the free tradition, but considerably different from Chris’ Necks. There’s more a sense of free and other forms of jazz, and avant-guard classical, in this tradition. I was most taken with some passages that developed as highlights, where Chris was playing fast and extended atonal runs, against a rapid, almost walking, similarly atonal bass and a busy drum feel. But there was plenty of searching with quiet music and big ears and unconventional use of the instruments, too. Mike leaning over the bass, bouncing dowels off strings or tapping the bass body or strings, or plucking strings below the bridge. Chris doing similarly unconventional things, playing with exposed hammers and strings on an upright Yamaha. But he also played conventionally, and it was a delight: winsome lines, light, playful, mobile in harmony and gingerly in melody. The Yamaha upright sounded wonderful with his gentle touch in conventional styles. James seemed generally more conventional in technique, but I loved some of his strongly syncopated, even delayed beats that had me hanging in anticipation. They played three numbers which I noticed were introduced by the three members in turn. Chris started the first tune, then Mike, then Ben, so although there were no composers, you could identify someone for the initial concept. It was a fabulous display of excellent musicianship all round, terrific listening and inventiveness, and an inspiration to visit the world of truly free but profoundly educated improvisation. A stunner. BTW, my preferred definition of “roil (v.)” for this purpose is “make turbid by stirring up the sediments of”, from Princeton’s Wordnet. Roil: it fits the band perfectly (but not the ales).

Preceding Roil were two solo artists in the electronica field. Firstly Tim Dwyer appeared as ///âÂ?²âÂ?²âÂ?²\\\ with “dubbed out garage drone-tones”. It’s pretty new to me as a performance art, although I’ve heard this type of music on radio. I liked it. It’s got beats (rather than a groove) although I only noticed 4/4 rhythms; it’s got visuals with a projection screen for computer graphics; it’s got movement and chutzpah. Technically, it’s got loops and echoes and effects, simple keyboard lines and alto sax, and with recurrent vocal utterances. He presented in a matey, jokey, baseball cappy way that didn’t exude seriousness, but I liked it. The second presentation was by Robert Curvengen, resident of Germany and Northern Territory. This was a different approach using different technology: a calm, murmuring study of natural sounds; a constantly mutating mix of drones and various natural sounds played from three CD players and two turntables and carefully blended. It was mysterious and constant and only slowly changing, so a click or pop from the turntables (something despised in pre-digital days) or a similar forest snap or insect crackle from a CD was an essential statement. I found it mesmerising if a bit long, but I’m not an afficionado. A mate with these musical interests was impressed. It ended unexpectedly with a blown fuse, sadly for Robert.

So, a fascinating visit to other fields of music. I enjoyed the electronica, if that’s what these were, but I was blown out by the skills and detail of Roil: just fabulous. Their obvious high spirits after the set confirmed it as a successful performance. BTW, I was recording, so hopefully it will make it to ArtSound’s Friday Night Live sometime.

Roil is Chris Abrahams (piano), Mike Majkowski (bassist) and James Waples (drums). Tim Dwyer and by Robert Curvengen performed solo sets. HellosQuare Recordings promoted the event and are promoting more in coming months. Keep an eye on CJCalendar and arrive early. This was a well-deserved sellout.
Posted by Eric Pozza at 3:16 pm