It was the smoother end of jazz, the audience was mature, the forms less challenging. But Neilsen Gough and his band were swinging their butts off, the playing was fabulous and I had a great time. We can’t always be at the bleeding edge, and this was an eminently pleasant and stimulating way to relax and just plain enjoy an evening of music. The smooth scene is definitely a different scene. Neilsen and the boys were introduced as satisfyingly sexy for the women with an apology to the guys. I thought of latin lovers: the band wore nice suits, Neilsen had something like that presence and his songs of love and rejection were fitting. But his output was broader than that: other originals dealt with the father/son relationship and spirituality. As for non-originals, there were several go-ahead, comfy, rollicking swings (Let’s fall in love, Beautiful friendship, Two sleepy people), some ballads, arrangements of two classic if smoochy Beatles tunes (Blackbird, Michelle), and two unexpectedly earthy 12-bar blues. I’ve been hearing so much syncopation recently, that I’d forgotten the enjoyment of a good natured swing, so this was in part a renewal of faith in the mainstream. 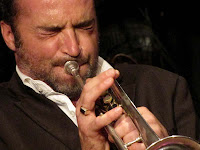 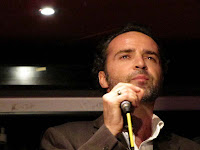 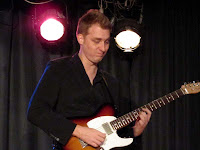 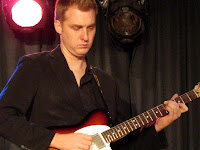 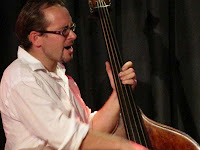 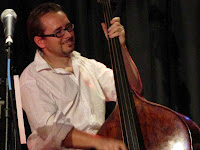 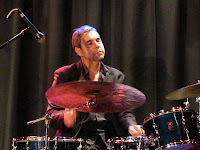 But what made the night was the playing. These were quintessentially professional and competent working musicians: serious but playful, individual but observant. I noticed from the first bars of the night (Sinatra’s All or nothing at all) that this was a capable working band, with an storming rhythm section that started hot from the top. It’s a good feel when the band starts well warmed up. It’s indicative of regular performance and a good and professional gig. So Nick on drums was my first observation: loud and punchy and watching and responding to the others. Then Mark Harris on bass. He was a character, grinning and toying around and laying down wonderful swings and grooves. Although classically trained, he had an rough, inexact-looking technique (as many jazz players do), but he felt good and was a great, joyful presence. He even played some serious French bow passages, although I preferred his very capable pizzicato. The third member of the backline was guitarist James Muller. Everyone in Australian jazz knows of James as a highly respected player of clear international standing. Tonight he was playing a Telecaster, and his sound was more edgy than I’d heard. I’d never heard so much of him before. I’ve spoken on CJ of his short blissbomb solos that leave you aching for more. This night he played a broader role, reminiscent of piano, with chords and melodic fills melded together into a smooth but harmonically enriching whole. And solos that blazed with speed and interest over the extreme ranges of the instrument, with sweeps, bends, scales, arpeggios, odd rhythms, chords. Even two Chicago blues solos that were a compendium of blues guitar techniques. A great master. And then to Neilsen, leading this fine rhythm section. He was the last to the stage, singing with involvement and jazz fluency and musky male vocals. There were some strains for high notes, but it just added to the effect. There was a serious and anguished but endearing edge, and it must have had female hormones flowing. Then he’d pick up his trumpet for lovely neat melodies that spelt the chords with clarity, then falling into flourishes of fast scalar runs and mixed intervals. Neilsen inevitably gets compared to Vince Jones and Chet Baker and I did hear strains of Vince’s vocals at times, but he was quite different: more busy on both vocals and trumpet, with leanings more to bebop than cool.

A very different outing for me and one that Megan enjoyed. Smooth and mainstream, joyous and swinging, just plain great entertainment … and with some fabulous playing.

Neilsen Gough (vocals, trumpet) fronted a quartet with James Muller (guitar), Mark Harris (bass) and Nic Cecire (drums) at the Top of the Cross at the Canberra Southern Cross Club.
Posted by Eric Pozza at 8:38 pm