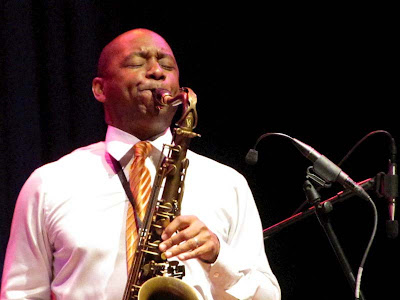 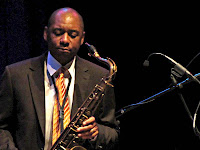 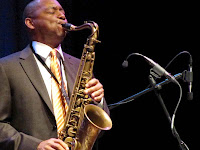 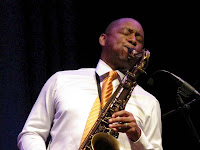 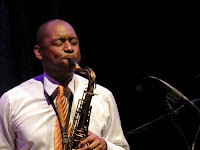 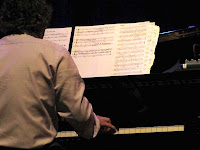 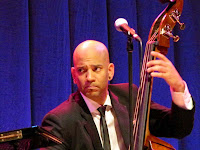 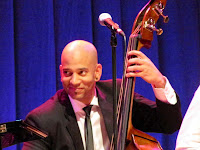 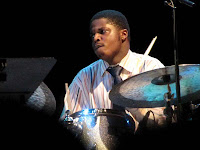 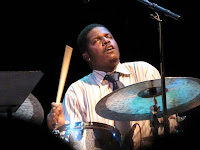 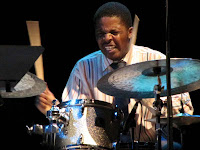 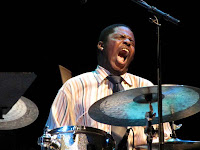 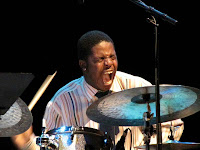 Branford Marsalis is an interesting character. He’s no jazz purist who argues that jazz ended when Coltrane started with more abstract styles in the mid-1960s. His modern-mainstream with brother Wynton on Black codes from the underground is exquisite. He’s recorded hip-hop-funk and with a music history theme with Buckshot LeFonque, and sophisticated pop with Sting. Branford is a man for all seasons. His performance on the recent tour was a return to roots, with walking bass, hard swinging drums reminiscent of Art Blakey (who he also played with), and even visitations to baroque music. It was a wonderful display of musicianship.

Branford toured with his quartet, comprising Eric Revis on bass, Joey Calderazzo on piano and Justin Faulkner on drums. I took me a while to settle in. I kept thinking of the style: walking bass seems somewhat passé these days and this was mostly in that hard swinging style. But I love that style so I succumbed easily enough, and the inventive playing was fabulously capable. I especially enjoyed Branford himself, and young gun Justin, who was celebrating his 19th birthday on the day of the concert (hard to believe given his musical maturity). Branford joshed with Justin (you can have a second solo because it’s your birthday) but also with the audience. It was a relaxed and jokey Branford who spoke directly and often and made for a friendly event.

But what of the playing? It was mostly hard ahead swinging in a modern style, well indebted to bop, but not limited to that. They played a Purcell piece (O solitude) with ostinato bass (in Bb natural minor). It worked, unlike many classical crossovers. The gig started with a breakneck hard-bop that was a technical challenge if a little dry, but calmed to a slower, melody-centric original by Joey. There was another original by Eric, Monk’s 52nd Street Theme, Miles’ In the crease, and a delightful Cheek to cheek as an encore. The solos were long and several times grew to frenzies. Justin basqued in that frenzy and passion. I felt he pushed Joey’s solos beyond comfort at times. Joey could be blissfully inventive at moderate to fast speeds, but lost something with simpler chordal playing at the most intense levels. Justin’s first solo, long and increasingly impassioned, brought the house down and he got to play a second over a 10 beat ostinato by sax and bass. Eric mostly walked, although there was a more syncopated treatment for In the crease. But how fast could he go and how easy was the playing? Branford was a pleasure with a tenor tone a mate described as “dark” and a soprano that sounded to me like a clarinet in its clarity. Wonderful skills that took chords and arpeggiated and inverted. Unpressured lines with evenness of tone and classical precision. These are the jazz gods, of course. I don’t love big venues for jazz, with all the sound coming from a PA bin and rows of fellow listeners lined up for reveille, but this was great playing with some memorable highlights. Much enjoyed.

Hi Eric, Thanks for another great review, I always enjoy reading them. I feel I need to comment on your line that walking bass is "passe". Nothing could be further from the truth. I would say that 95% of the professional work that I do is playing a supportive role and in particular walking bass. For a young bass player, being able to play walking lines consistently, with solid groove and full sound is the most important skill that they need to acquire. There does seem to be a movement away from "swing" which I find interesting however to say that this style is passe I think disrespects where jazz is rooted. I encourage my students to focus on being able to play walking bass effectively because in the ever shrinking world of gigs, this is going to be their bread and butter as well as being an art form in itself. Just ask Ron Carter.

Brendan, Great to hear from you and thanks for the comment. Probably my “passe” comment is glib, but I’ve noticed there’s not much walking bass in concerts I attend these days. My guess is rhythms are moving from swing to more even feels and bass is changing from steady walks to syncopated and more open rhythms, and this has been happening since the 1960s. I find it fascinating that you are playing so much swing professionally, but as you say, swing is core to the tradition and paying gigs won’t always be at the bleeding edge. I definitely mean swing no disrespect. Excuse me if I implied that! I actually think walking bass is quite a hard thing to do: to make the line steady but also interesting and varied, and to maintain it without breaks is a challenge, especially at faster speeds. And a steady swing is a sublime thing. Well worth a bassists’ chat sometime. Eric