NY up close and personal

Internationals are in the air at the moment. Last night it was a visiting New York outfit, Jacam Manricks’ Quartet featuring Aaron Goldberg. But unlike my recent Opera House concerts, this was in a small room, with a club atmosphere, as jazz should be, and with a chance to chat with the masters. So this was special. And these were no slouches; they all have significant pedigrees. Aaron’s pedigree has to take the cake, being sideman for the likes of Freddie Hubbard, Madeleine Peyroux, Wynton Marsalis, Nicholas Payton and Joshua Redman. But the others have notches including Ray Charles, Ben Monder, Bob Mintzer, Dave Liebman, Jeff “Tain” Watts, Lee Konitz, Jeff Ballard, Barry Altschul, Andrew Cyrille, Gary Bartz and Mark Levine. Wow! Jazz heaven. It’s a long way from NY, but Jacam and drummer Danny are Australians so are presumably on a working holiday back home. Great to see the good turnout and organisation to keep Canberra on the circuit. Saves a trip to NY. But what of the playing? 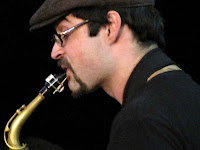 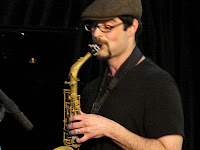 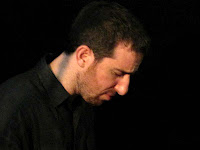 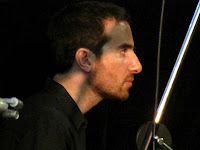 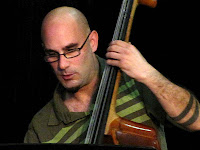 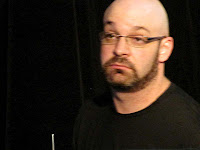 The concert comprised two sets of nine tunes in total, mostly taken from Jacam’s new CD, Labyrinth, along with Coltrane’s Countdown. Mostly it was modern style with syncopated rhythms, complex heads, sometimes repetitive grooves on madly syncopated ostinato phrases in odd time signatures, sometimes long chordal patterns, sometime complex structures. Gangbusting was a lively opener. Long ago and old fashioned was a mix and reharmonisation of parts of the standards Long ago and far away and I’m old fashioned. Mood swing was a tribute to Milton Nascimento. 2-3-2 and Sketch were examples of those difficult repeating syncopations. Aeronautics was a gentler ballad style. Microgravity was originally called New bolero, so obviously bolero in feel, but in 9/8 time. Countdown was Countdown with its Coltrane changes. Labyrinth was the final tune, a hugely complex melody with a super-fast little filler bridge.

Jacam led all this with a honey smooth tone and snake-charmer glissandi on some tunes, but then hardened up with honks and squeaks for some others. Hugely fluent arpeggios and extensions over the full range of the alto; dropping in and out of long double-time passages. A mate commented it was like a sax trio alternating with a piano trio. I didn’t hear it quite like that, but Aaron’s piano was similarly powerful and well spoken. He was often relaxed in finding the muse (there was a common feeling of space and sparseness in this band) but then he’d grow to consistent patterns ranging over the higher octaves, with varied left hand harmonies and an uncanny, drummer-like ease with maintaining a left hand syncopation against a right hand solo. I commented on the difficulty of reading the syncopations, and bassist Andrew agreed, saying it was only on Countdown that he could really play rather than read. So his was very much a challenging support role in this outing. Danny seemed more comfortable with the pieces. I’ve heard him with Jacam in the past, so presumably they play together often enough. He was a master, providing busy rhythms and colour using bushes and sticks and one time hands. I noticed again that ease with kick drum syncopations against complex right hand solo lines and the sharpest of stick techniques presenting mathematical permutations of beats and divisions.

Suffice to say, it was a magical concert, well attended and very well received. Thanks to the band for the fabulous performance and for saving us at least this trip to NY. But also to the decent turnout that will keep Canberra on the touring map.