Oh my god! How different can two piano trios be? I wrote of Alister Spence yesterday. Today I write of the Ben Winkelman Trio. There’s a city difference (Spence/Sydney and Winkelman/Melbourne) and maybe there’s something to that, but I heard this as a difference of period and generation. Spence was modern; Winkelman was post-modern. Both were fabulous, but hugely different. 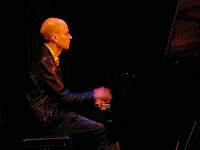 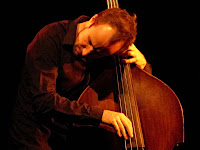 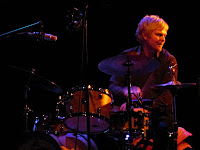 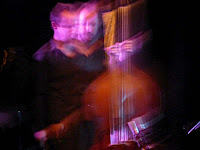 Ben’s obviously classically trained, showing that light touch and ease that comes from exercises and etudes. He also based two tunes on themes from C20th classics that he’d been studying: Ravel and Messiaen. His trio comprised Sam Anning on bass (originally Perth, but now Melbourne) and Ben Vanderwal on drums. It’s a rhythm pairing I’ve long admired. But why the po-mo? Post-modernism is an ironic mix of genres and styles, as against the seriousness of the modern and its rational humanist belief in progress. Here the po-mo showed as a melange of styles that were combined with great competency, but also lightheartedness: stride, latins, tango, swing, brought together with odd and changing time signatures, and extensive, wildly syncopated arrangements. There was a lot of written work in this - unison lines, complicated ostinato passages, changing forms and themes - and the solos similarly held a style then moved on, aware of difference and toying with it. I think the tunes were all originals from Ben’s albums: Spanish tinge, Steppin’ 2, Vampires, Five Odyssey and Seven Odyssey, Dislocation, Maxine stomp, and others. The names mean little without the albums. Dislocation was a gloriously sparse ballad with a solo by Sam to die for. A few others grew with long crescendos. Otherwise, they morphed playfully. Ben was the leader. Well spoken as presenter, and well voiced on piano with a gentle touch and moderate volume. Ben was not overly rapid, but he explored ideas without technical restraint, coolly and thougthfully rather than heart-on-shoulder emotionally. Sam’s such a lovely player. Terrific fluency, tone that’s present and not edgy, long runs of long intervals and arpeggios over several octaves, sharp right hand syncopations that patter with 16th notes. And solos that glowed with purpose. Ben V’s another varied character. He’s not so much a groove merchant as a lover of jumbled sounds. It’s seldom that he maintains a steady groove; rather there will be rat-a-tats on woodblocks or cowbells, or rudiments on any of the standard kit. He’s got an intellectual approach, knowing his rhythmic options, but he also presents an earful, sometimes sounding of jazz history with even patterns to match the strides or stomps they accompany. I remember him similarly playing with tones of window ledges, glasses and the like years back at Hippo.

This night that was so different from the previous. 3x2 has been quite a revelation; a marvellously diverse and intelligent offering. Thanks to Street and the bands, and I hope they do similar things again. Ben Winkelman (piano) led a trio with Sam Anning (bass) and Ben Vanderwal (drums) at the Street Theatre 2.
Posted by Eric Pozza at 12:01 pm