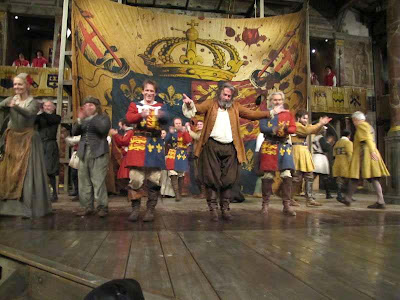 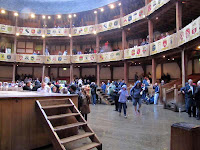 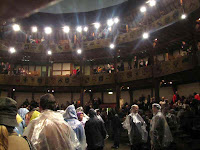 Shakespeare is the great playwright and symbol of England and the English language, so a visit to the Globe to see one of his plays performed in recreated Tudor style was an exciting prospect. I only got the idea a few days before. Seating is limited and was sold out, but there were tickets available for groundlings (standing room in the pit) for Henry IV Part 1 on a day I could manage, and to top it off, the price was a miserly GBP5. I couldn't resist, especially given that I'd performed in this very play at school (not a big part: 10 lines in 4 characters). I was a little reticent about the thought of a 3-hour standing session, but in the end, it was the rain that was the issue on the night. Yeah, it had settled in by then. But I bought a plastic poncho (available at the theatre for just such occasions) and joined the social throng. It was great. I started undercover at the edge of the pit, but the sight lines were poor and I was struggling to follow the script, so I moved to the front of the stage, in then open rain, and this was much better. I could hear the voices and was increasingly habituated to the language, so the second half was much better for me. It was a great presentation with good cheer and social interaction, as you'd expect when people share such a trial. My toes froze but the experience was memorable. The Globe performs with floodlights to simulate day time performances in Tudor times, although the planes flying overhead were incongruous. The actors were mostly covered, but sometimes in the rain along with the groundlings. The story is of Prince Hal (to be Henry V) who starts as a wastrel, a flibbertigibbet and good mate to the full-bodied and witty Falstaff. By the end of the play he's showing his seriousness in battle to the satisfaction of his father, Henry IV. But the presentation was great and involving and both fun and intimate, unaffected and uneffected. The music was real trumpets and trombones and drums performed by the players. There was singing between acts, no lighting, no audio. And to end, an amusing curtain call when the whole crew dance disco-like to music. This was unexpected, but fitted wonderfully. Everyone left in good cheer, if drenched. It was a worthy outing for the cleverness of Shakespeare who mixes wit and seriousness in this play with astounding ease, and the historical visit to another time and another pace of life. There are no pics during the performance, but I did get one of the cast at the curtain call. The Globe is a gem for a London visitor, and cheap as chips*. Be a groundling when next in London.

*Cheap as chips is a particularly apt reference here. Shakespeare's script has several references to Cheapside and chips are on the plate of every tourist in this town.
Posted by Eric Pozza at 4:50 pm