Lucking out in London

We've left the kids behind to look after the dog, and it's another jaunt to Europe. This is a family visit, with Megan and Mum, so I don't expect to get to much jazz, but I always try to hear something in any city I visit. For the first outing in London, I certainly lucked out. Not just for quality but also for coincidence. 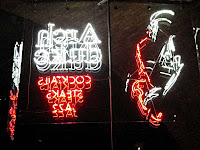 Firstly, you should know there's a wonderfully purposeful and comprehensive listing of jazz in London which is available online and in print from a few jazz centres. It's unceremoniously called “Jazz in London”, but it's a gem. Twelve pages of small-print listings of gigs from a range of venues, both better and lesser known ones (Ronnie Scott's, Pizza express, 606 and Vortex come to mind as better known). My first thought was, what a scene! I was overwhelmed with options. In the end, my time and knowledge of the town was limited, so I chose one with two bands, free entry, on the tube and near our apartment, and at a time that fitted family and tourist outings. Either I lucked out, or this is a scene like I can't imagine! I've now decided it's a bit of both.

The venue was Archduke Live! It seemed pretty modern, swish and tame on entry, and the first duo initially seemed fairly subdued and lounge-bar-ish at first. But listening with my ears instead of eyes, I realised the very complex vocal contortions, and the lovely movements into and out of dissonance by the pianist. Then vocalist Zena James introduced her offsider as Mike Guy. I thought I knew that face! Mike Guy trained at the jazz school in Canberra, moved to Melbourne and and now resides in London. I wrote him up when he returned to Canberra for a visit and performed at Trinity with old mates a few years ago. We chatted. He's now busy 6 nights a week on Keys 2 in Thriller, the Michael Jackson musical which is now playing on Shaftesbury Avenue. You probably know that London is a centre for musicals and they congregate around Soho and Shaftesbury Avenue. It's big business and there are something like sixty of them on at any time, and they can go on in the same theatre for years. It's a big business for capable reading musicians. Mike's had this gig for the last 18 months. He'd called in a sub for the night to back Zena. Mike told me of his subs: one was keys with Level 42; another toured with household names. Very impressive.

Back on the gig, the tunes were soft and restrained in volume with a range of standards and pop tunes. Michael Jackson's Human nature is so good it has to become a standard. Otherwise, Body and soul, Old Black Magic, Nat King Cole and the like, and an end on a tune composed by Zena's father, a bluesy 12-bar called Peace of mind. “It's been a long time / playing with my mind / I can't find / some peace of mind”. This was the opening act, as a duo, and entertaining eaters, so it was not raucous. But Zena's singing was busy with delicious jazz complexity and softly voiced, although, for me, a bit too excited on the heavier lyrics like Body and soul. I only heard a few tunes and what with ordering beers and looking around, I forgot to note Mike's style in accompaniment, but he was wonderful in solos in the comfortable but intelligent way he departed from underlying chord statements to explore substitutions. A lovely performance and a great start to the night. Zena James (vocals) performed a duo set with Mike Guy (piano) at the Archduke.

Thanks Eric, good to meet you and hope you luck out some more while you're here!