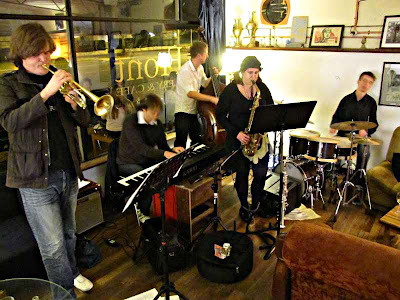 We’re struggling with venues and audience for jazz in Canberra at the moment. Maybe it’s our cold winter nights, but poor Aaron McCoullough and his Elements Quintet were at the blunt end of it. There were some locals at the Front, but I reckon I could count on one hand the listeners who attended specifically for the gig: Gordon, and me, and a few other possibles. Too bad, because they missed a thoroughly entertaining and lively performance. 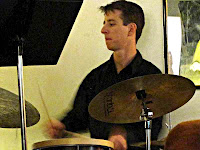 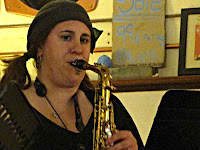 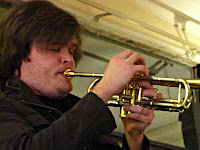 Aaron leads from the drum kit, but he’s a drummer with a sense of music beyond rhythm, and I like that. He provided several of the compositions, tunes that were standard in the modern sense of head and solos and chord progressions, but arranged into medleys and changes that sometimes surprised and left lots of room for solos. Aaron and the band play with real energy and drive, and it was mostly in this go-ahead vein that the solos were performed. Aaron himself took frequent solos, solos that arrived without warning and just naturally extended the driving and forceful style that accompanied all the tunes. To end they played a Branford Marsalis tune, In the crease, and I thought that Aaron must have seen Branford with that rabid drummer, Justin Faulkner, on his recent tour. Not as extreme, but Aaron had the same sort of hard and energetic approach. Daniel on piano and Pat on trumpet were similar in their full bore commitment, playing very fluent, long and sustained 8th notes runs, mostly sounding to me as diatonic, embellished with unexpected little rhythmic and melodic twists. Bassist Michael was grinning with glee at the energy and excitement of all this. I understand. Bass is such a big and involving instrument and I find myself similarly grinning at times when things are cooking. This side of things sounded to me of seventies jazz in the hard bop tradition: unison melodies and Rhodes accompaniment and driving rhythms. But there was also another side, which appeared when saxist Claire played. Claire had a very different approach, reminding me of the restrained expressions of Wayne Shorter. She variously played alto and soprano, with a tone that was soft and non-metallic, fitting with the malleable structure and effective dissonance of her solos. Much more the pensive note, the twisted fill, the torrential flourish. She was quieter, too, where the guys were loud and impulsive. All entertaining, all impressive and both sides worthy of the listen: tapping with the guys and musing with Claire.

There were originals from virtually all members, and a few non-originals: Travellers by Aaron Parks, a piano trio piece by Robert Glasper, and Branford Marsalis’ In the crease. There was busy syncopation throughout and just a little swing, and I counted at least one 7/4. This was a spirited performance and that little audience was very appreciative by the end. Let’s hope that appreciation is enough to keep the bands coming.