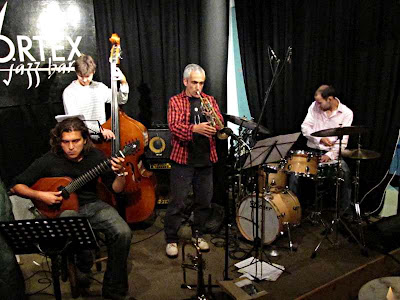 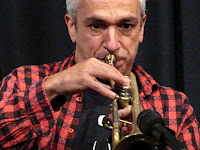 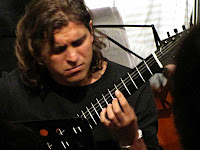 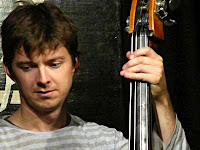 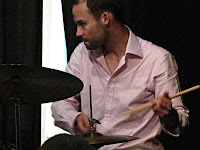 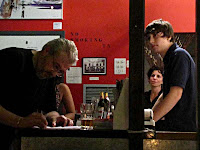 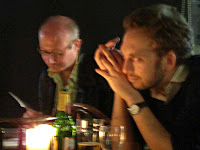 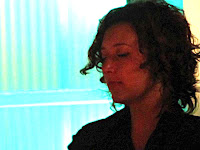 I chose the Vortex for a second jazz night out in London. Loz Speyer and his Quartet were performing “in the key of Monk”. Everyone loves Monk, so it sounded interesting. It's a fairly challenging neighbourhood to navigate, and well out of the centre, but no hassles after working out directions. In fact, a few workers from the local railway station responded to my question about the location of Gillett St, with “Looking for the Vortex? Go down...”. How out of place did I look, I wonder? But I got there.

My first impression was the incongruity of a Monk session without piano, despite the presence of a grand piano on stage. But then I doubt that Monk would have been so limited in conception. Loz led in with Monk's Evidence. It was standard Monk with those staccato rhythms and oddly selected chords. Loz's flugelhorn led nice passages through the chords, sitting on key notes of the chord and finding neat tracks to the next. The guitar was comping with dissonance that I found quite apt for Monk, and bass and drums were sitting with truncated rhythms that seemed just the part. The night continued with other monk tunes and originals by Loz with influences form Monk. I particularly enjoyed Dave's double bass which just seemed spot on for the style. Nice little triplet fills and chord segments that moved up and down the fingerboard. Very elegant and very apt. Andy on drums was not so outspoken, but again seemed to sit in the style with comfort, soft and frequently polyrhythmic. I was a bit uncomfortable with Stefano's guitar. He's obviously a capable player, with devastatingly fast scalar runs on a seven string guitar (an instrument that I associate more with grunge than jazz). But I wonder if I am being a mouldy fig, because I didn't enjoy this mix: a guitar solo with heavy reverb; another with buzzing overdrive; comping to the bass solo with Metheny chords; organ swells. But he was a good player, and would have been a blowout in other contexts. Loz's tunes were decent compositions and had elements of Monk, but were more grounded, not so brilliantly absurd. No surprise because Monk is so unique.

So in summary, it was an interesting visit to Monk and his influences, with good playing and a guitar that was in itself a quirky choice. Loz Speyer (trumpet, flugelhorn) led a quartet with Stefano Kolonaris (guitar), Dave Manington (bass) and Andy Ball (drums) at the Vortex in London.
Posted by Eric Pozza at 3:09 pm