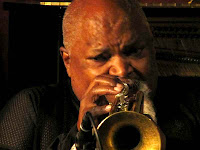 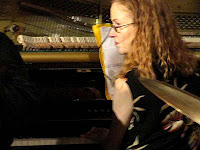 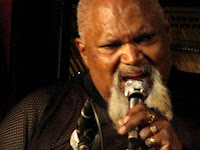 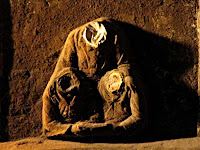 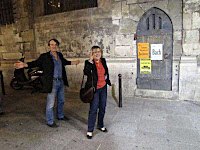 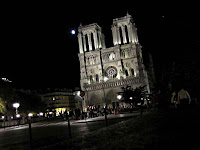 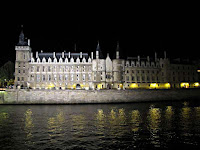 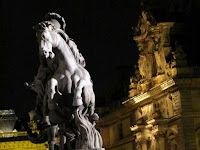 So I thought while listening to the Ted Curson Quartet at the Caveau de la Huchette in Paris. This man was invited to New York by Miles, performed with Mingus at Antibes, had time with Cecil Taylor, went to school with Ted Heath. But he's got a job to do and dollars to earn, and this venue didn't exactly lend itself to such musics. I should have guessed from the other artists in the Huchette program, or the background music before, with boogie and R&R and White Christmas. We got standards at the pop end of the spectrum: Bye bye blackbird, Georgia, Blueberry Hill, and some that don't make the standards books, like Just a gigolo, Slip slop & slide, and You made me love you as a 12-bar. Ted sang, but it's clearly not his forte. He is a trumpeter and flugelhornist, and a nice one. I enjoyed his solos that played with sequences in chromatic movements, and repeated bluesy lines with neat responses, and lovely classic lines. Dizzy and Miles were influences but he's neither of these. Nice playing. But he's not a great singer and if he were, the buzzy PA wouldn't help. Poor Katy on piano had parallel problems with a Yamaha upright that was way out of tune. This was honky tonk plonk plonk. Sad, because she could obviously play with dissonance and was a good player. In fact, she's a professor of piano in Paris, and also had that position at Berkeley for a few years. But it really sounded awful. Then Dominique on bass was good, but he'd presumably brought his own gear. His solos were lyrical and fast and diatonic and well phrased in a mainstream way. Just plain sweet and correct. And Michel was steady as should be for the swing dancers … swing dancers? Yeah, lots of swing dancers, and a dance floor and stuff. Hey, it's not that I don't I like swing dancers … in their place … with cute and undemanding '50s R&R. But sad to see an old promise reduced to formula; sad to see a venue as such mulch; sad to see such trained jazz players reduced to swinglers. Dancing, swinging, I'm so gay, hey, hey. Did I mention I was disappointed?

But then, this is Paris, and it was a mild Saturday night in summer, and the sights are wondrous and there's still a show on. And I have my lovely clockwork music box as a souvenir, that plays La vie en rose. So Paris retains its romance despite the dicky swing club. Ted Curson (trumpet, flugelhorn, vocals) performed with Katy Roberts (piano), Dominique Lemerle (bass) and Michel Denis (drums) at the Caveau de la Huchette in Paris. And nice to meet Antero, Finnish jazz follower, multi-instrumentalist and diplomat. Look me up if you get to Australia.
Posted by Eric Pozza at 5:32 am