Seeing the gig the same 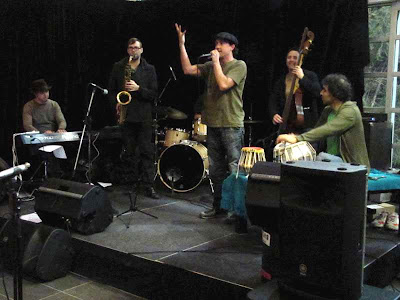 Michael Galeazzi of the Java Quartet was telling me of a mate and PhD studies in music. He was investigating how different performers in a band see the same gig in different ways. It’s an interesting study, and I guess any highly trained performance art person must have experienced it. Jazz can be quite an emotional roller-coaster, but it’s part of the commitment and fascination and seriousness of it all. The time the band was in accord, after this Java Quartet gig at the University of Canberra, as was the audience. This was a great gig. Michael was up front, happy and joking and enjoying every minute. The percussion section (here I include the beatboxer along with the more obvious drums and tabla) were throwing challenges back and forth and revelling in the different sounds and styles of each of their instruments. Greg on piano and Matthew on tenor were laconic and cool but their blissful interplay said it all. This was the first gig of the tour to launch the Java Quartet’s new CD, Rejavanation, and the quartet was accompanied by two of its CD guests, Morganics on beatbox and freestyle rap, and Bobby Singh on tabla. It’s something I like, this fertile, cross-cultural experiment. It worked a treat and the band’s response just confirmed it. 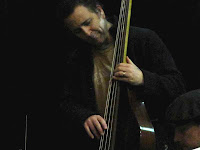 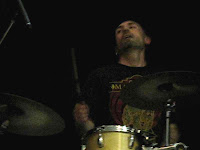 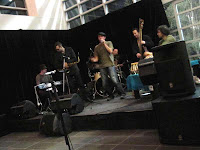 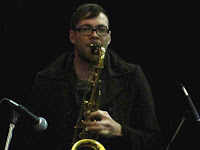 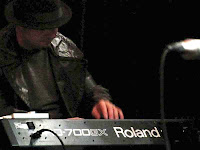 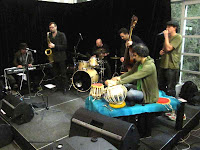 I wondered if rejavanation hinted at rejuvenation, because there were a series of tunes from older JQ CDs that had been reimagined for the new CD and this concert. The album cover describes each tune by a style: trance, ambient dub, boom bap, etc.. The CD’s press release explains the music as a component of Michael’s Master studies at the Sydney Con, exploring “notions of hybridity through contemporary hypnotic landscapes” through the “meditative aesthetics of contemporary dj/dance culture and Hindustani ragas”. Intriguing and different, interesting beyond the jazz field, and obviously entertaining for the band. Because getting back to the band, they were having a great time.

Firstly I noticed the wonderful rhythmic feels. Drummer Mike was intense at surprisingly low volumes, then letting go at the end with double kick pedal; fabulous interplays between the complex tika-tak of the tabla and jazz drums and even vocal percussion; the way the beat squared up for the beatboxing from the more swung jazz segments. Then the simple, repeating melodies accompanied by moving chordal harmonies or echoing piano lines and the rippling piano and fluttering tenor bursting into full blown sax solos over intense and busy grooves. And the frequent bass solos on a Whitehead SASE that were sharp and edgy, but surprisingly deep in the recording I made on the night. Not at all strict jazz, but obviously jazz informed, and one branch of where it’s heading as it touches on other valid forms. Solos that just appeared from a band that has played together for years, and shows an unspoken interplay. There was even a ballad in there, a deeply felt, sparse thing of synth swells then sax then a touch of percussion. The whole was structurally and chordally simple, but subtly mobile and with an underlying percussive intensity. And it was even political, perhaps more validly than the current election. I missed most of the rap lines, but caught a few that spoke of Brisvegas: “Visions, valleys, concrete”; and refugees: “sometimes / we find / that time”, “sometimes / the best form of attack / is defence” and then a rap in 15 languages.

It was an intriguing jazz for a modern ear, and a mix of styles for a modern world. Great stuff. And very much enjoyed by performers and audience. The Java Quartet are Michael Galeazzi (acoustic bass), Greg Coffin (piano), Matthew Ottignon (tenor sax) and Mike Quigley (drums). Their guests were Bobby Singh (tabla) and Morganics (beatboxing, freestyling).
Posted by Eric Pozza at 5:03 pm