So sounds the Harlequin

Text and pics by Daniel Wild

The Harlequin is an appropriately named venue for jazz performance. In eighteenth century Italy, the role of the harlequin was to play the buffoon in an improvised drama. Just as the performers worked from a rough script and pre-set roles, so do the jazz players of today work from sketched chord charts and preconceived notions of what it is to be a lead, bassist or drummer.

Lindsay Winkler’s quartet provided laid-back and swinging musical soundscapes at the Harlequin in Pyrmont, Sydney. This is a pleasant venue for jazz although the many television screens, multiplied by mirrors, proved distracting for audience and musician alike. The musicians didn’t falter in their improvisation but you could see their eyes wandering towards the screens now and then, and this might have limited the interaction they achieved with the audience and among themselves.

They played “Milestones” at a steady pace, refreshing for a piece that is often played too fast. Granted, the modal structure allows for fast renditions and displays of virtuosity, but note Bill Evans on the Waltz for Debby album, where he showed that the soloist who pays heed to the underlying structure can tease out quartal harmonies. Quotation and exploration of the opening motif are also possible when playing this piece on its merits.

Winkler was a bit rough and squeaky around the edges when quoting the head; once he settled into his solo there were some smooth and vintage alto sax lines. Monique Lysiak’s solo on Milestones was exceptional, indicative of many years experience and a well trained ear. She listens thoughtfully, builds on the main theme and subtly varies it through different tonal centres and pitches. The way she colours her solos by using the whole keyboard is intriguing to the listener. She builds the expectations of the listener. Expectations established, she then made use of what sounded like quartal chromatic ascents that lifted the solo to another level before safely returning to earth in time for Shannon Haritos’ bass solo. 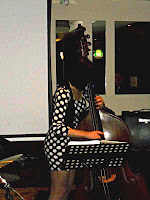 The bass provided solid ground work for the keys and sax and the solos were interesting and executed as if he Haritos was plucking a guitar. She makes the playing seem effortless and has a deft command of the instrument all the way up the fret-board. Her solo on a dreamy rendition of “All the things you are” and on a bluesy piece in F minor were well appreciated by the audience.

“Stella by Starlight” was romantic, dreamy, impressionistic and very satisfying. Winkler seems most at home when playing ballads. He moves the listener with silken tones and thoughtful phrasing that moves like a wave up and over the floating bobber on a fishing line. 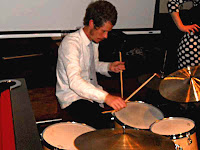 Sam Barr’s drumming was solid throughout. Perhaps there was an overuse of the kick drum, but this is purely a subjective assessment. Many like the emphasis that the kick drum can give to a peaking lead phrase (especially in fusion); others feel it has only a minimal place in swinging jazz and should be used gently, if it all. Barr’s solos are always a pleasure to hear. He quotes military themes and is not afraid to overtly experiment around seemingly simple motifs on the snare which are then incorporated into more complex sallies around the whole kit.

The band was tightest when playing medium swing pieces, although there were commendable aspects to every standard they performed. The last piece, BlueTrane, requested by the audience, was one of their best, with deep and harmonies on the keyboard that showcased Lysiak’s touch. At the end of the bass solo, Lysiak made the mistake of telling Haritos what key the piece was in and what note the bass line should centre around. It is best in jazz to leave these things to chance and the musician’s ear. All things considered, there were worse things to be doing on a Sunday evening. This light-hearted jazz, not worn on its sleeve, provided a much needed post-election antidote.