London's Les Mis and the Lido de Paris. It's not a space I would normally inhabit. These are two mega shows of popular commercial entertainment, but I'm on holidays and, as a mate once said, you should try everything once. And you know what, they were both brilliant in their own ways. These are not works of profundity, and to some degree, they are triumphs of style over substance. But they were performed with such professionalism and capability and skills, that I couldn't cavil. These were good. 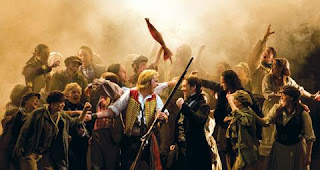 Firstly, Les Miserables on Shaftesbury Avenue in London. Fabulous performance, fabulous audio, fabulous sets with the noisome, simplistic repetitive music and a plot that was almost rom-com in conception. I expect the Victor Hugo had more depth, but this was love conquers all against the backdrop of a French revolution. Not the Paris Commune or the big one of 1789, but ~1840s. The story was spread over about 20 years as a good criminal does the right thing and protects a female orphan as she comes to maturity. I had a big head in front for the whole show, so that was disappointing, but the dark and smokey stage sets and stunning props were to die for. Also great voices and subtle but effective audio (heavy echo and reverb for the quiet but emotional tunes) impressed. The small orchestra was OK, and biggest when the keys played big orchestral fills. Interesting also to watch the way they controlled the emotions with big choral numbers before interval and to end where all 26 performers sang in chorus, and the couple of segments of operatic counterpoint where two or three key singers sang together. 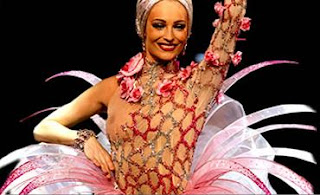 Secondly, the Lido de Paris. This is cabaret in the big, expensive, showy style of Las Vegas (or perhaps Las Vegas is in the style of Paris). Early on, I thought of Sinatra and Elvis in their later days, for their was swing and bombast, but then I there was disco, and a feature was performed to music of Nino Rota, and there was a segment from Cabaret and a James Bond theme was there too. The music was a pot pourri or styles and songs, richly and seductively arranged to support a totally inane show of great bodies, wonderful skills, extravagant costumes and complex lighting. I found incongruous several feature segments that were straight from the circus: acrobatics, juggling, ice skating from a rink that was raised from under the stage (!), equine dressage, but they were done with ultimate skills. I adored the luxury of it all. And no warm-bodied human could really deny the bods up there for our delection. It was probably all very risque in 1910 when the Lido opened, but now it's just lights and action signifying nothing. This review was called Bonheur, which I guess means good time or good humour. That about sums it up. The numbers where models sing “Je suis belle / Sono bella” and the paean to shopping says it all. This was commercial drivel that was fabulously entertaining and I loved it. Just don't search beneath the skin. But there was one off-note: the tribute to Edith Piaf was gauche. The Lido can make no claim on the passions of Piaf's heartfelt songs and actually I doubt it does.

Of course, you can't take pics at these venues, so thanks for these snippets from the relevant websites.
Posted by Eric Pozza at 2:16 am