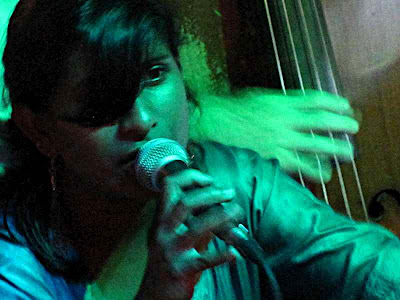 Mike Guy told me before the gig that I'd got lucky: I'd chosen a great night to visit the Archduke. The Anjali Perin Quartet was hot: a good choice. By the end of the night, I was swinging and totally in agreement. It was just a pick-up gig. This was not a regular, rehearsed band, but these were wonderfully competent musicians. Presumably amongst the best in London: stunning stuff and wonderfully enlivening. They were just arrangements of standards, some funky interpretations, some lovely swinging walks and bouncing twos-to-the-bar and syncopations, but this was bliss. This is why we follow this music. Emotional truth, collegial sharing, hype-free, and all with a well informed skill-set. 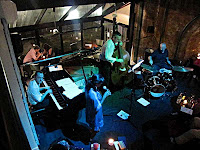 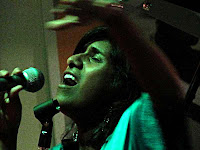 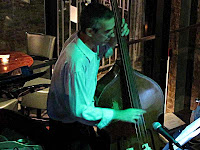 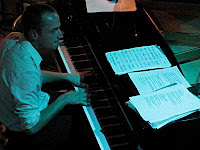 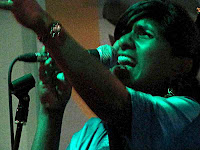 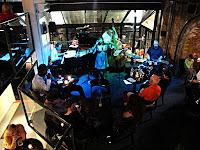 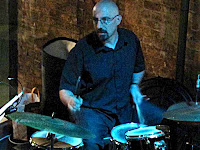 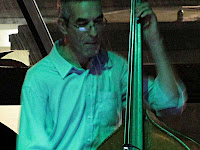 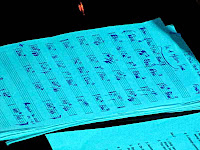 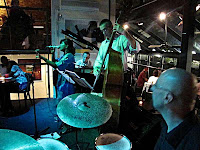 Anjali was once a classical pianist and violinist. She was also a commercial lawyer. Then she studied her masters at a local London jazz school, and now she's been professional for 5 years. She's mature. She's educated and subtle. She's entertaining with patter and good humour. All that a singer should be. She's also a lover of the great singers, Sarah Vaughan and the like, so there is intense involvement that expresses itself in hand and body movements and richly interpreted lyricism. And vocalese, and pitches that slip over the octaves, and arrangements, and even scat that I can enjoy. This is authentic stuff. And the band: such a great rhythm section. Davide, the bassista Bolognese who has been resident in London for 20 years, had a soft and un-edgy tone that was none-the-less always present. Easy and unforced accompaniment and frequent solos that sang. Drummer Enzo, the other Italian connection, sat with deceptive simplicity, but close your eyes, and this was recording quality: easy grooves, unforced fills, sharp yet understated. I felt Ross stood back earlier, but loosened during the night to longer solos and more adventurous substitutions. Powerful playing and open expression. The whole band just leapt to attention from the first bars of the first set, with a busily syncopated Love for sale. Such energy, solid swing and long adventurous latin solos and montuno accompaniments. Then into Yesterdays and Anj's delightful and very black scat and fluid sense of time. Thereafter, Ellington's In a mellow tone, Softly, You don't know what love is, and a more obscure number done by Chet Baker, Do it the hard way. Also Bye bye blackbird moving from New Orleans to New York, Never will I marry, a Sam Cooke's 12/8 A change is gonna come, and that bouncy Honeysuckle Rose, which speaks with the most suggestive lyrics, as we were told. All pretty obvious as a repertoire, but done with energy, tightness, driving grooves and inventive solos.