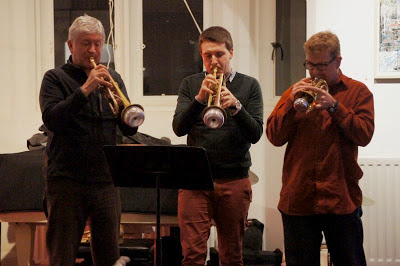 I’d hoped there would be no rhythm section and there wasn’t. This was three respected brass players performing alone: Miroslav Bukovsky, Reuben Lewis and James Greening. Reuben quipped during the night that you have to work hard without a rhythm section. He told me after that this was performing with risk. They had performed a few tunes and even a set in this configuration, but never a whole performance of two sets. It’s demanding music, heavily improvised, often quite atonal or even just noise, so it’s something for a sophisticated audience.

I think it was Reuben who had pulled this performance together; he certainly provided the patter (other than James’ always amusing interjections) and chose the tunes, even if this was essentially democratic. He was a student of Miro for 9 years and of James for some time. There’s an obvious respect and goodwill between the three as well as a well evolved musical understanding. James first joked about the charts and spun the music stand to show the music. These are not the standard dots-on-staves compositions, although there were some staves. One tune seemed pretty much written (Get well soon); several had clusters of notes on staves, but with various instructions (or not) for how to interpret them or in what order to play them; a few were just squiggles or blots or computer symbols, perhaps with a legend to assist. Compositions that look like this date back 50-or-more years and I’ve seen charts looking like this in front of “classical” new music performers. There’s expectation of more than just the Western trilogy of melody / harmony / rhythm here: there’s also timbre and tone and noise and space and the rest. There are plenty of clear notes and phrases although in all sorts of implied harmonies, although I doubt that, while they are onstage, they think in those terms. The notes and phrases seem to exist as unique sounds, individualised, although influenced by this environment and forming after-the-fact harmonic relationships. These guys handle it with aplomb. I noticed one altered arpeggio as it developed from a first note. This sort of thing happened all night, of course, but this was so pure and unadorned and sharply intoned and so much pulled from silence so perfectly that it took me back. It’s day in the life for musicians of this calibre but it can still surprise me. There were three brass, perhaps three trumpets or a mix of trumpet, flugelhorn, trombone and pocket trumpet, a panoply of mutes, perhaps percussion. The tunes were constructed (this seems a deter term in this context) by Reuben. Each player took one solo, but otherwise they were collaborations. None of this is easy, but close your eyes and it’s a landscape you don’t imagine exists. And swinging even without a rhythm section.