SSO in the raw 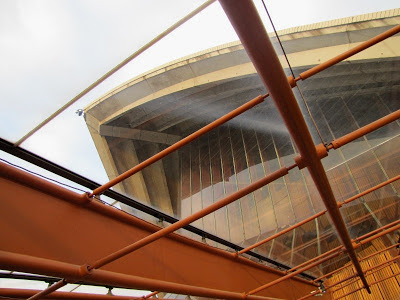 I’ve heard the Sydney Symphony Orchestra several times recently, but never raw like this. They were playing Rite of Spring in this 100th anniversary of the work. It was a riot when it was first performed in Paris. It’s not like that now. The audience loved it and I was one. It’s a riotous mix of loud and soft, virginal and savage. You have to think of Picasso and his mates at the time in Paris intrigued and influenced by the primitive. The sounds are anything but classicism: block chords; instruments moving in parallel; riotous and brutal rhythms; great flittering movements of matching phrases and contrasting lines; heavy with drums; lightened by flutes; and the orchestra reading irregular bars. The SSO sounded different: rough, sometimes careless, butit was apt for this departure from staid civilisation. We may not understand that people cared so much in 1913, but given they did, I can understand the riot on the opening night. It was written for Nijinski’s dancers, so this was bigger and more offensive to that changing world than even the music. It reminds me of King Kong at the gate (in these days of a new Australian Kong) taking the maiden sacrifice. Its influence is now so imbibed, through movies, even cartoons, yet it still thrills. We sat next to two cello students from the Sydney Con. Was it rough, like I thought? Were the imprecise orchestral hits written? No, we were right, this was rough, but it had such life. As it should; as is needed. Loved it. 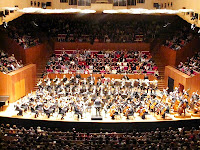 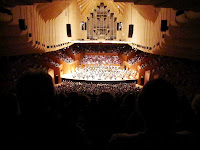 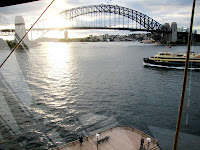 But it was not the whole program, and it was not all so raw. First was another Stravinsky, Song of the nightingale, about real and mechanical nightingales and an Emporer’s sickness. It’s a short opera with plot borrowed from Hans Christian Anderson. The real and mechanical nightingales are obvious when you listen for them: the real is pure and creative on flute; the machanical is abrasive and limited, with perhaps only one song. Second was Mendelssohn’s Violin concerto in E minor. It was an attractive work to my ear, and the conversation between violin and orchestra was neat so the violin was seldom lost. Concerto soloists needs sturdy technique and strong volume: there are a lot of instruments over her shoulder. I enjoyed the purity of the violin and the thrill of the high harmonics she plays to. There were some cadenza passages, too, that intrigued me: triplets shredding over the four strings. I wondered how they could be played and must relisten to a recording. I realise also that it’s a good key for violin, with a low G (minor 3rd) featuring early (the lowest open string) and the E tonic on the highest string and those octave harmonics. Again, a wonderful and neat performance.

I was surprised by the acoustics. The Opera House is not renowned for them, but from where we sat, literally the last row (Y) this sounded good, or maybe a touch toppy. I reckon they’ve done much work with numerous mics hanging down into the auditorium (I am assuming those sausages are mics) and several PA speakers hanging from the roof. The piccolo may have cut too strongly, but I liked this sound.

In summary, I prefered the rabid excitement of the Rite of Spring, but enjoyed both other more staid works. The Sydney Symphony Orchestra performed Song of the nightingale and Rite of Spring by Stravinsky and Mendelssohn’s Violin concerto in E minor. Arabella Steinbacher (violin) soloed for the violin concerto and Charles Dutoit (conductor) led the orchestra.
Posted by Eric Pozza at 8:13 pm