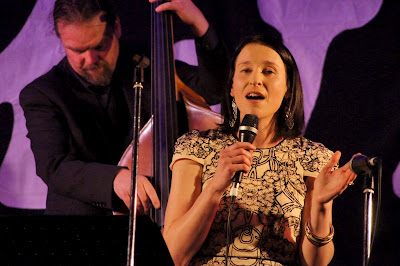 It must be the very professional concert series called the Melbourne Jazz Festival that causes the conflicts with the much more community-level Merimbula JF. I have been booked to go to the last two Merimbulas. Two years back, an incredible weekend of Ron Carter, Jason Moran, Kurt Rosenwinkel, Dan Tepfer and others intervened. I hoped for a similar collection at Darling Harbour last year. No such luck but I’d pulled out. This year, I was committed and again there was a clash: Tony Malaby (NYC: Charlie Haden, Paul Motian, Fred Hirsch) and David Ades playing Saturday night just 2 minutes walk from my house, no less. So Merimbula has a history for me, despite this being my first visit.

Merimbula is 3 hours from Canberra and a standard East coast seaside town. The weekend started cold, with brilliant sun but frigid winds. As I arrived there was traffic chaos with two accidents. One car was on its side just metres from my residence. I started the weekend by registering and orienting myself. For a little town, there’s a bit of walking between venues and a few hills. I got to four venues (6 stages) and missed one venue that’s not walkable. There’s a good deal of trad jazz here, the standard street parades and Saints marching and massed brass and some banjos and even New Orleans-costumes in frilly green to match the be-ribboned balloons decorating each venue. It’s also a town out to capitalise on an event (mayors really should keep some things to themselves, but economics has become the lowest common denominator of citizenship these days) and several thousand visitors enjoying some decent music and a few beers. There’s a spattering of ANU students I know, and a new generation that I don’t. There are many bands out of country Victoria and they are new to me. There are quite a few big bands but I missed most. There were eight stages running hourly gigs from noon to midnight. Given considerable choice, I decided just to take a relaxed approach, mainly hanging out at the Sapphire Club and write up only a few bands that took my fancy.

The Clark Spillane Quintet was led by bassist Steve Clark with singer Colleen Spillane. This was a classy, relaxed standards band playing the mainstream: There will never be another you, At last, Polkadots and moonbeams, Time after time. They added a few pop numbers: Masquerade (of course) but also Walk on by, which suited Colleen’s voice to a tee. I also discovered a lovely new ballad, I think it was Watch what happens. I admired Colleen’s well controlled voice and fitting vibrato and the band was relaxed and steady. Nice also to hear Canberra pianist Mark Bolsius. The Clark Spillane quintet was out of local town Candelo and comprised Steve Clark (bass), Mark Bolsius (piano), Matt Dixon (guitar), Ken Varcher (drums) and Colleen Spillane (vocals).

I just caught the end of the Army Band Jazz Ensemble gig: only one last song, Perhaps. First off, it seemed tame, but then there was growing tension, dissonance and a feverish drum solo and a denouement ending. I was chatting, so it was just in one ear, but I wish I’d heard more. Never take the Army for granted.
Posted by Eric Pozza at 6:05 pm