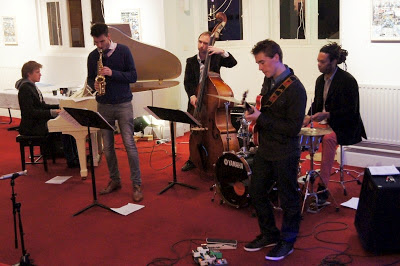 Australians are everywhere in the jazz world and plenty are in NYC. The Quentin Angus Quintet played at CGS Gallery the other night. Three of five are Adelaide sourced, two of these are currently resident in NYC. I’d actually heard the NYC pair sometime back in Adelaide, so they even have a history on CJ. But any visit from a famed jazz city is exciting to local jazzers and this certainly was.

Quentin leads from guitar, writing most of the tunes and leading the band. They have played widely at festivals around the world, and its shows in their tightness and easy responsiveness to arrangements, all the starts and stops and changing feels, and in the easy responsiveness of the players to each other. It’s a very accessible, attractive music. It reminded me of West Coast guitarists with easy feels and lyrical melodies and some rock influences. John Abercrombie isn’t West Coast, but he is of the fusion camp and I’m pretty sure that Quentin has been studying with him. Quentin’s attractive compositions and echoed tone and crisp runs reminded me of that scene. So did US drummer Kenneth Salters. I asked about his take on technique, playing ride with left hand, not crossing the snare hand. He told me he’s left-handed playing a right-handed kit. I didn’t quite confirm if that’s by preference or loan (the kit was on loan) but his technique didn’t seem to suffer at all. [PS. I checked YouTube later and Kenneth is regularly playing a right hand kit]. It actually seemed that this uncrossed form lent itself to a driving, less riffy/repeating style rich in toms and fills and responsiveness and implied rhythms. This was subtle and colourful playing with dynamics that moved easily with surrounding solos and drum lines that fell effortlessly from his sticks. Chad on soprano and tenor saxes was the major soloist, even if everyone had their spot in the sun. Geoff remarked on the power of his soprano, and it was a satisfying tone. He’s a lanky man and he strangely rocked and cavorted and stepped but his long unstoppable lines moved through tonality and dissonance with structured fours and were a wonderful display of modern-cum-contemporary jazz. Matt on piano was more impressionistic, presumably with classical references. I missed most of his comping because the small grand was not a match for this band in flight, but this was softer, flowing with large scale and range and arpeggiated colours. Bassist Lyndon was the only Australian resident, out of Adelaide and presumably touring with returned mates but no chops lost here. He was strong, fast, responsive and quite an eye-opener in thumb positions. They mostly played originals by Quentin, but there were some standards: takes on Rhythm’a’ning and A weaver of dreams and Ornette’s Turnaround and well altered arrangements of Nardis by Matt and another of All the things you are featuring drums. But the essence of this band was driving and powered jazz with a good deal of post-bop influence and attractive compositions. Great stuff. Adelaide done good here; no doubt about that. Much enjoyed.