Out is not easy 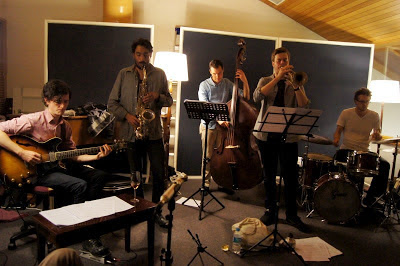 The two sets by the Callum G’Froerer Quintet at the Loft were very different. I found the first was dreamy and meditative; the second had more groove, even some walking bass and rock and jazz rhythms. That’s not to say this was not still a challenge to the ears. I had a good chat with bassist Sam after the gig and he wised me up on the approach of the band. This is not for the faint-hearted musician.

Firstly, there’s lots of listening and considerable risk: these guys are not satisfied with playing the tonics. The tunes were all by Callum, other than one by saxist Andrew. The tunes may be a melody and an underlying chord structure, but all 12 notes are valid here. We chatted about how you make valid those notes that you’ve chosen. You play them with conviction and you play them in response to the other band members, but that’s only part. Sam talked of practising a simple major triad, in all inversions, paired with the triad a major third below, eg, C with Ab. It’s a common movement in jazz composition. I mentioned pentatonics to guide note choices against different chord types, so against C7 you might play a major pentatonic on C, D, Eb, F, Gb, G#, A or Bb and all have their distinct colours which are really extensions with relationships. It’s the relationships that that are important. All notes are not equal; different groups of notes are equal in defining different tonalities or levels of dissonance. Exciting stuff. My interest was also piqued when Callum introduced Andrew’s tune as “constructed” by him. Sam told me afterward how it was “constructed”: each musician selects a phrase that can be looped, then plays that phrase with whatever delay between repeats. It was like the chart I saw for a composition at SoundOut. So how to describe the result of all this? Harmonic understory from guitar and bass with busy percussion only hinting at a rhythm and a slow, often unison, melody overlaid. Not all tunes were like this, but it was a core structure. One tune had a rock groove (totally unexpected here and late in the night). Another had a jazz drum groove with a fast walking bass; Sam explained he fought against muscle memory and standard phrases on this one. The looped tune was all spacey and indeterminate. Another had a four chord pattern. Silver platter was a call and response melody over a 6 x 6/8 pattern. Rocky Mountain had a jagged melody that was the genuine sound equivalent of rocky mountain tops and craggy valleys. So, there was variation but overall this sense of atonality. And maybe one thing left to mention. The stage presence was very moderate, softly spoken; the bass was acoustic and sounding great even if sometimes lost against drums; the overall volume was very restrained, in a fit with this presence. This is a band of seriousness and inventiveness and considerable harmonic skills. The other day a mate said playing out is easier than playing in. I’m not sure I agree, especially after my discussion with Sam. Finding the formally wrong note which is actually right is no small feat. Confidence alone isn’t enough.