Our own local Nobel 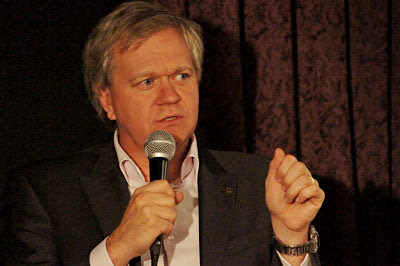 Brian Schmidt is everybody’s favourite scientist these days given his Nobel Prize. There were murmurs of approval at Brian Brown, the previous month, when Brian’s name was mentioned as the next speaker, but then, Brian’s session didn’t end up as well attended (politicians make better saints for most people than do scientists). Brian was speaking on Evidence and Politics.

He ran through a series of arguments from the sciences and I found them mostly unarguable. Science is a process that makes predictions based on available data and this data is the evidence. The test is that it (predictions, technology) works. Scientists always question theory and evidence and this is not appreciated by the public or politicians. There are limits to evidence but there are mechanisms to decide “beyond reasonable doubt”. Once you introduce emotion to science, “you’ve lost the battle”. Politics is different; it requires compromise and ethical/moral judgement. He ran through some examples. Newton and Einstein and how we’ll never have the ultimate theory. Out technology is based on scientific deductive reasoning, and this is what gives us our modern life. We like our lives now: 700 years back “life suck[ed]”. So science works. He suggested predictions can be used for social matters and it’s also useful to recognise when “we have no idea”. His other examples may have challenged the audience: nuclear energy; coal seam gas; Murray Darling water; light rail in Canberra; fisheries; saving the Great Barrier Reef. By implication, he suggested both sides were not seeing the big picture. (FWIW, I agree).

He discussed probability and the public’s lack of comfort with it. Climate change was the obvious example: 90% certainty from evidence; 99.9999..% certainly of the underlying physical model. He confirmed that we’ll know better in 25 years … but it may not be a pleasant position to be in by then. He brought up the interesting diversion of electrons in the quantum world, that we can’t be certain of their location at any time although we can be (virtually) certain that our arms will rise when we wish, and if they don’t it’s not due to quantum physics. (Scientists have a nice wry humour about very big issues). He questioned the role of debaters and prominence given by the media and others in climate change and other contentious topics. Debaters manipulate uncertainty for an unaware public. He mentioned an obvious name, but I won’t. Debate is good, of course, but only where people genuinely understand, so a consensus of informed people is the most likely to be correct. This is where he enters into practical politics, suggesting Consensus Expert Panels to advise politics. This is not a common approach in Australia and it’s a weakness. He gave the example of the Australian Fisheries Management Authority and its super-trawler decision being rolled. This may or may not be the best result, but the process has damaged the role of expert opinion. Brian knows something of this. His father was a fisheries regulator in Alaska and he’d had decisions overturned by politics. In this context, his father considers Australian fisheries to be the best managed in the world. Undermining the decisions of any independent advisor (by either side) leads to poorer decisions. If advisors aren’t independent, deal with that, but don’t roll decisions for political reasons.

I was stunned to hear of the expert committee investigating coal seam gas, set up under legislation with a budget of $150m pa (10% of the total research budget for Australia?!?!?!?!?!?!). Brian’s answer was a body like the National Research Council in the US. The NRC collects evidence and advises government with about 50 reports pa at a cost of … ~$150m pa. These bodies are willing and ready to share expertise, so a standing committee for widespread advice could cost far less than the single committee for coal seam gas. Brian suggested $20m pa. What a sensible suggestion! Politicians may start off with good intentions but our bitter, professional politics dirties what it touches. This is a very disheartening period for politics: one side that plays the emotional card (very well) and opposes all; the other side that seems incapable of arguing its case; the public increasingly despairing and despising them both.

Back to questions for Brian. Is the Australian media complicit? A: Not really, they are just commercial organisations. I didn’t quite agree with this response. At least one paper seems to have been run for ages without profit, presumably for political influence. An ANU law lecturer questioned the use of “Beyond Reasonable Doubt” in this context. He hadnt used it in a strict sense; she highlighted the structure of courts with judges to mediate and confirm proper practice. Someone asked about “muddling through” as an approach to politics. A: It’s a bad strategy when stakes are high, like with Climate Change. There was inevitable discussion of teaching kids about probability and evidence. A: Should kids be opt out of maths and science and the rest. I certainly hear plenty of poor logic and unrecognised assumptions these days and wonder if return to a more traditional, classical education would help. Someone asked about pilot programs. A: They are sensible when issue are “murky” but require the best evidence to design them and they benefit from multiple pilots. Someone asked about balancing evidence with other values. This seemed strange to me: surely evidence is not a value; rather, it’s value-free. I was interested how Brian responded. His wife is an economist. He suggested many processes (cause-effect links) in economics are clear but the ethics of moving equity around is contestible on moral/ethical grounds (eg, efficiency vs. distribution). Also, individuals can remain free (eg, to smoke), but given the costs of their actions are clear at the social level (health costs), actions at that level are justifiable (heavy taxes). I found this good, clear thinking. The last question was on scientists in Parliament. Interestingly, Brian wasn’t worried about that. He noted that the two professions require different skills. Also that under a Westminster system a politician must be prepared to argue positions s/he doesn’t believe in, and “I couldn’t do that”. I can understand that.

I didn’t find anything particularly new, although I enjoyed several observations and I despaired with him over some of the examples he raised. I liked the suggestion of a moderately funded and internationally-connected National Research Council. Good on evidence, I reckon.

Let me mention my encounters with Brian. Astronomy is one of my lifelong interests. Before Stromlo burned, I was a member of RAPT*, a group of amateur astronomers gathering data for professionals at Mt Stromlo Observatory. Brian was one of our professional advisors/leaders. We’d taken part in the discovery of extra-solar planet ~no.9 and Brian had called us together to explain. It ended up with the group members listed as authors for an article in Nature (!). Also, I remember my stunned surprise one morning when I woke to read on the front page of the Canberra Times that the expansion of the Universe was accelerating, not decelerating. This was the work of a team on the Hubble led by Brian. That led to his Nobel and the rest is history.

PS: *RAPT was the Reynolds Amateur Photometry Team. RAPT was using the 30” Reynolds telescope at Stromlo to track light curves of Macho candidates to inform on dark matter. Basically, dark matter makes up 90% of the mass of the universe. This is known from speed of rotation of galaxies (another story). The theorised explanations were machos and wimps (wonderful physicist humour). Machos are Massive Compact Halo Objects, basically Jupiter-sized objects that we don’t see optically, but we can observe as they cause gravitational lensing of more distant visible objects. Wimps are Weakly Interacting Massive Particles, basically neutrinos that pass through everything and so are difficult to observe. The question is what proportion of each of these are out there. A team on the 50” Great Melbourne Telescope at Stromlo was observing ~20 million stars per night to find candidate Macho objects (by observing changes in brightness in two colours of stars in the Megallanic Clouds). RAPT would track the light curves of candidate objects in more detail. MACHO light curves would be the same in different colours (unlike variable stars that change brightness through inherent physical processes). As I remember, they expected ~20 Macho objects pa, but found ~6pa, suggesting that some part of dark matter was Machos, but some part was something else. Our extrasolar planet was a spike in the light curve of one of these Macho candidates. In the end, the RAPT team also worked on other projects, including Gamma Ray Bursters and supernovae. It’s a ridiculously small part to play in the development of knowledge, but I look back on it fondly.

Brian Schmidt was leader of a team working on the Hubble Space Telescope to better quantify the speed of expansion of the Universe. He used Type 1A supernovae to determine distances which he them matched with speed of recession (from red shift) to determine change in speed. Physical properties of these supernovae allow astronomers to dertermine their absolute luminosity, so their apparent brightness informs us of their distance. In another delightful twist on language, astronomers refer to these and other objects with knowable absolute luminosity as secondary candles and use them to determine distance in the universe. All this, and uninformed fools still persist in questioning scientific consensus on issues including global warming.