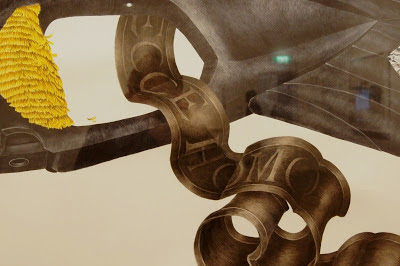 eX de Medici is perhaps Canberra’s most noted visual artist. I finally got to an exhibition at the Drill Hall Gallery on Saturday. I think most people love that style of florid detail, the flower-power exhuberance with its history in Art Nouveau and Arts and Crafts Movement and perhaps similar styles back to the Romans and before. Abundant nature has probably been a continual theme in visual arts around the world, even if it's so much under our control these days. Perhaps now the references are as much to Mandelbrot sets and fractals and constant detail however deep you explore.

Obviously, a person can’t do what a computer fractal can, but eX does explore multiple levels so it’s a journey to experience the whole, then delve into the obscured detail. My two favourite pieces supported just this. One was Live the (big black) dream. This was darker than the other pieces, predominantly black, with derailed trains, tyres, thorns, skulls, military paraphernalia, a hidden comment “entropy” and the rest. Most works dealt with military matters, with many rifles turning to embroidery or petals or strips of shells turning to greenery. One large work had helmets lost in prolific flowerbeds and what seeemed like a history of warfare: Prussian coned helmets to the left, well grown over, through to Australia’s fresher, workhorse helmets to the right. The works are watercolour on paper and eX paints on the flat. I expect the runniness of water colours and the precision of doodle-like detail must require that. It’s a fascinating approach with watercolour's clarity and freshness applied to a military context. Some works appear less finished, so there are areas of paper showing, but the really stunning works are alive with detail. I understand this was a retrospective for C100, so there are a few works of other times and themes: Blue Sky Mine with Midnight Oil from the National Portrait Gallery collection, some butterflys, some circular images and a bug or two, but mainly these military works from the her period as a war artist in Iran. I was also taken by a large mountainside scene, and the techniques she used to portray the rocky complexity of it all. (While on the Military theme, it reminds me of George Lambert’s “Anzac the landing 1915” at the War Memorial: same rocks, same colours, same cragginess). This is one work that requires distance: too close and it drops into lines and strokes, but at a few metres, it’s a wonderfully detailed portrayal under a sky of pink and yellow flowers and some phrases of peresumably Arabic script. Fascinating, great technique and some works were beyond my comprehension in this quick visit.

The Drill Hall also had a few works on display from the ANU collection. Most impressive was Sidney Nolan’s Riverbend, a wide work on 9 panels with Ned Kelly-like characters in a Goulburn Valley billabong scene. BTW, Riverbend is on permanent exhibition at the Drill Hall.
Posted by Eric Pozza at 12:29 pm