Sex and the once-single $hopper 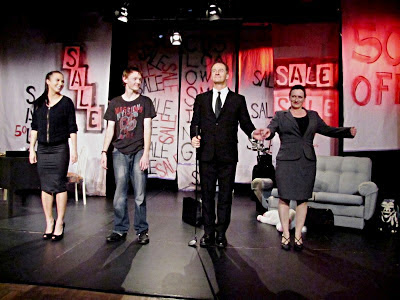 Sex is involved in all sorts of matters, so why not in saving the economy? The Reluctant $hopper is a lighthearted comedy by local playwright Bruce Hoogendoom. It was Bruce who took tickets at the entrance and his parents who served us at the bar so this seemed particularly local, but Bruce has had his plays performed around Australia and as far away as Helsinki. This play was a comedy: light, somewhat frothy and short. There were four cast and three central characters. Barry works for a local Business Council. There’s another financial crisis and the government is too indebted to support the economy, so he blackmails Sam, a very tight public servant, after-hours DVD salesman – and millionaire inheritor – with threats of denunciation to the Tax Department. Sam has to spend $100K in the local shops. Suffice to say, Sam does not find this easy or pleasant but the alternative is fines and gaol. At one shop (a deliciously unnecessary gift shop), they spy the very attractive shopaholic Lisa. Her credit is maxed out, so Sam helps out and soon Sam and Lisa are an article. Barry decides he’s done wrong, that PA shopper Lisa is just after Sam’s money, but loves conquers all, Sam learns to enjoy shopping (and ignores his depleting bank account), Lisa recognises her problem, Barry adjusts himself to his reality, and everyone’s happy in the end. Why not a comedy about economics? After hearing just recently about fraudulent Irish bankers and LIBOR, we need a few laughs. And we might need Barry’s techniques soon enough.