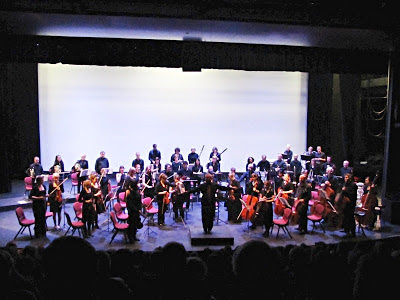 A concert is such a nice way to spend a Sunday afternoon, even when it’s delightfully sunny outside. This Sunday it was the National Capital Orchestra performing at the Q Theatre. The theatre is just the right size: fairly small with a generous stage and raked seating and satisfying acoustics. NCO is a local amateur / semi-prof orchestra, so we don’t expect the slick and perfect that you get from full-timers. It had its weaker points in intonation and phrasing at times, but we were very pleasantly surprised by this outing. As conductor Max McBride noted before the concert, he enjoys leading an ensemble with commitment. Professionals can suffer after the nth performance of Mahler. Not that this was Mahler. They performed Sibelius Karelia Overture, Bruch Violin Concerto no.1 and Tchaikovsky Symphony no.1. The Karelia was not the better known suite, but it was satisfying with its orchestration and sweeping images. I checked for the date of the Bruch, wondering if he was somewhat old fashioned for his time. Certainly I felt Beethoven-like blocky chords and big dynamic changes, but Beethoven had been around almost a century before. Much respected local Barbara Jane Gilby was the soloist. I’ve always seen her seated as leader of the first violins in the Canberra Symphony and I felt she was just a bit uncomfortable to be standing and without charts. She slipped on one or two passages, but I enjoyed her tone and revelled in her best lines, repeating sequences and long ranges of various arpeggios and scales (I noticed one that seemed to go on forever, three octaves plus?) that could be quite devastating. Megan didn’t know the Tchaikovsky so well and it’s not often performed. It was written around the time of Swan Lake and is balletic and, interestingly, was his only symphony in a major key. Unusually, too, it has five movements. I liked this with its all romantic swells and phrases passed through flutes and clarinets and oboes. The last bars of the first movement felt like an early end to the piece: Megan just commented “that’s Tchaikovsky”. It’s not too big a work, but very willing. But there’s more. Leonard Weiss led the NCO Brass Ensemble in the foyer during the interval in a performance of Gabrielli Sonata à 8, pian e forte, all quarta bassa. It was wonderful with sharp tonality in this harder space, and the brass sounded great split on two balconies, left and right, although there was some conflict between interval chatter and the performance. I heard at least on shushing over my shoulder. But congratulations to the NCO. This was a very worthy and satisfying concert, perfect for a Sunday afternoon, even if we sadly missed some winter sun.

The National Capital Orchestra was led by Max McBride (conductor). They performed Sibelius Karelia Overture, Bruch Violin Concerto no.1 and Tchaikovsky Symphony no.1. Barbara Jane Gilby (violin) was the soloist in the Bruch concerto. Leonard Weiss (conductor) led the Brass ensemble in Gabrielli Sonata à 8, pian e forte, all quarta bassa in the interval.
Posted by Eric Pozza at 9:37 pm