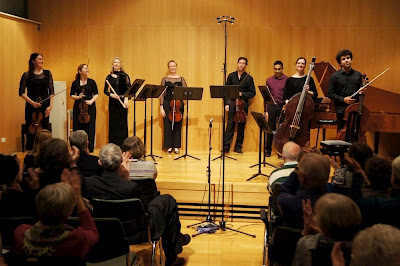 Garth Mansfield, the Director at Wesley Music Centre, thanked the Australian Haydn Ensemble at the end observing that they had staged 1,100 concerts over 12 years (something like that) and this was one of the best. I certainly agreed it was something special. Partly because we had involvement through billeting; partly because of the performance. This was early classical music, played with period instruments, all gut and transitional bows and fortepiano. The Wesley is great space for this music. It’s not a particularly pretty but it’s nicely timber-reverberent, of longish shape and relaxed and intimate.

The music was Haydn Clock symphony no.43, Beethoven piano concerto no.1, Salomon Romance in D and Mozart Jupiter Symphony no.41. The ensemble is not large, numbering 8 for the Mozart, so we could follow individual lines, feel the flow of melody and passing phrases, watch it in the musician’s own movements and follow their eyes as they watch for prompts. There’s no conductor, of course, so there were lots of glances. Chatting after, cellist Tony commented favourably about how frequent these glances were. Part of all this is the informality that this music seems to exude. I observed Neal Peres da Costa on fortepiano as he was watching and waiting to come in for a passage in the Beethoven, rocking on his stool with the beat. This is intimate music, and the informality of performance drips from it. It seems so unlike a conductor-led massed orchestra. There’s movement there, too, but I guess it’s lost amongst massed musicians and sections that are biding time and counting. I didn’t hear gut in Handel’s Theodora the other day in the large space of the Playhouse, but we heard gut here and felt the bouncier effect of the bows of this era (they are differently balanced and have the hand some way up the shaft). I also chatted with bassist Jacqueline Dossor and was surprised by her tiny bass (unknown Bolognese luthier c.1750) with a shape harking back to its viol forebears. It was probably built for 3 strings tuned in a triad. Things were different then. The fortepiano was even more obviously different with its soft but tubby, plucky tone. The instruments are otherworldly but so is the music. I speak of this music as dignified and courtly but to see it in this original form makes me think seductive intimacy rather than intellectual respectability. Not that there’s not classical order here, but there’s also playfulness in musical structure and in performance.

I haven’t spoken of performances here but there were seriously impressive individual presences here. I particularly noticed Melissa Farrow’s woody flute and Alice Evan’s fine violin tone and Neal Peres da Costa’s very easy-going fortepiano, but this is as much a function of their forward roles. When I concentrated on any player here, I was satisfied and involved. I loved some unison rapid lines on bass and cello, and Anthony Albrecht’s energetic responses to the music, but they were all involved and mobile. Both ensemble and audience were delighted after the performance. Joyful and informed and somewhat seductive. The Australian Haydn Ensemble returns to Wesley on 19 August for a program of the nascent classicism of CPE Bach. Sadly I can’t make it. Book early: after this gig, expect a sellout.