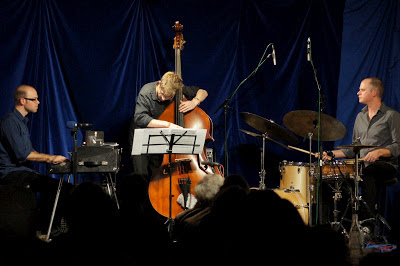 I hear a mix of professional and community activities in music and otherwise, but the full-time, well-trained, professionals are really where the skills are. I was thinking this at the Gods, watching Steve Barry’s trio, but it’s evident with lots of visiting artists or trips to the Opera House and the rest. A life committed to music, as with any art, may be challenging but it’s the way to really get things together. Given some reasonable talent, of course.

Steve’s trio are young guns with chops and something to say. I’d expected a quartet with guitarist Carl Morgan but he’d been called away overseas. So this was a Rhodes piano trio. The tone and even the era is somewhat set by the Rhodes piano, so I wasn’t surprised to hear a Herbie Hancock cover, but mostly this was original music written by Steve. It’s not obvious head/solos/head format, although essentially it’s structured like this. It feels different because there’s more fluidity in the modern approach and styles. The tinkling Rhodes is pretty constant in volume and dynamics, even if mobile in harmonies, against an improvised syncopation in bass and some driving and oft-swelling drums. I was seated where I could easily follow the drum parts, each arm and each leg, and I was entranced. Each part splits the rhythm independently, but it makes an understandable whole. That’s the nature of drums, of course, but seeing a capable drummer lay it out was a pleasure. I mentioned his quick feet to Tim after the gig nd he said he likes to dance. This was certainly nimble footwork. The double bass is by nature big-footed so slower and demands a different approach. I love that syncopation of implied beats that is a feature of this jazz, as I love walks that are shared with earlier eras, but it was the solos that took my attention. Tom played perhaps three longer solos, mainly in the second set. They were not so much conspicuous virtuosity as thoughtful investigation. That’s good. Long ranges, right into the high thumb positions, big drops to open strings and neat phrasing. The band ended with the standard, I’ll be seeing you, and I felt Scott LaFaro and Bill Evans here. I’d recorded and was surprised to find only three tunes in the second set, so this was generous with time spent with the tunes. The first tune after the interval must have been getting on to 20 minutes, but there was structure and crescendos and decays and changing features and a constant buzz of interaction, so the interest is easily maintained. Chris volunteered that this is his preferred style of jazz. I initially thought of European jazz (Chris likes Euro-jazzers), but I heard it more as an American style. I wondered about the piano trio as a democratic format. It’s a lovely ensemble to play in, without the outwardness of the sax or trumpet (not that I don’t enjoy that, too). Perhaps it’s also the intensity of rhythm, because piano is a percussion instrument. Piano has a sustain pedal but a piano’s sustain is nothing like a horn. Perhaps it’s the open sound of hard attacks and quick decays, or the spaciousness of just three instruments. I enjoyed this concert, thrilled with some great skills and it got me thinking. Thanks to Steve, Tom and Tim.