RN in the flesh 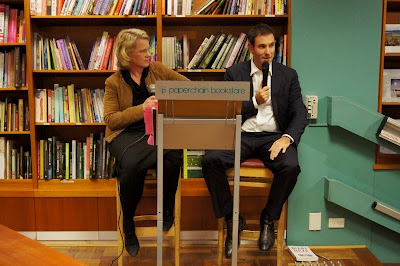 How can you not love a book launch in Canberra? This one was at Paperchain in Manuka for the book Glory daze : how a world-beating nation got so down on itself by Jim Chalmers. Laura Tingle interviewed Jim Chalmers. Jim was senior advisor to Wayne Swan during the GFC. These are major figures in the national political scene. They were not the only ones present. I was chatting to one bloke after and he turned out to be Hugh White. Someone joked about Steven Koukoulas and he was there. I’d been stunned by a blinker-shattering, fact-checking article by him that very morning. We ended up eating with a John Warhurst and Joan. I’d shared a school with John many years before. The place was teaming with staff from political offices. Their intelligence and youthful energy are obvious. That’s the environment. Radio National and Federal politics in the flesh. And you can chat.

Jim introduced the book. It’s in three parts: a proud story of Labor and the GFC; a discussion of the political system with its poisonous despite outcomes (viz, 22 years of continuous economic growth); thoughts on the way forward, aligned incentives and communication that works. His view is from inside government and he recognised a siege mentality. This was the time for emergency responses, to GFC and climate change. It’s an environment of tight-knit teams, huge work hours and deep camaraderie. He framed it in terms of Swan’s Bizarro speech, where he talked of the disconnect of Australia weathering the GFC and being the international economic darling while its people were pessimistic (more than Spain!) and angry. He gave examples of Glenn Stevens speaking on GFC success and Nobel prize-winner Steiglitz: “best designed, best deployed stimulus in the world”. He found reasons in a consistently negative opposition, shock jocks, a biased media and a small number of prominent businesses (he said 1%). He questioned whether a corner had been turned, noting that enough money will prevent reform and this reform is the reason for our recent success. He discussed PMs and personality-presidential politics. I’m still pondering his statement that PMs are now “bigger dogs on shorter leashes”. He touched on opposition that is addicted to quick hits, and that government learns what is possible. He noted governments shouldn’t overpromise and underdeliver (not just governments, of course). There was some discussion about the coming election: shock jocks will find their way (they do); the impact of personality and polls; the likelihood of a contest of ideas and how Rudd will pick them.

Much of this is interesting for the interjections and sidelines and jokes, so a write-up doesn’t do it justice. I felt some observations missed some context. Like the failure of the Mining tax had several progenitors, very obviously including Rudd’s backdown on climate change. A perfect world will have policy and no spin, but messages are important. Lots of Gillard legislation is no match for Keating’s three key issues that the public understands. Labor was running from Abbott under Gillard, but Rudd is now running rings around a meek Abbott. That’s his forte. Too bad for Gillard, who will be likely remembered as an achiever as well as our first female PM. But you’ve got to own the right seats in Parliament, so you need to win. No use being a sainted failure other than for the record books. In fact, I feel education and disability are shaping as those key, understood, accepted Keatingesque public issues and they are there now. We’ll see. This election is interesting again. I’ve started reading the book. I now understand the bigger dog reference (Our PMs are bigger dogs than US Presidents but they can be more easily rolled). As I read on, I realise the commitment of the political process, gather increasing respect for those who commit and recognise my limited, media-imposed understanding. Despite NSW Labor and Howard’s good-times handouts, I continue to respect Australia’s basically decent political process. Even if some mates find me naive.

Laura Tingle interviewed Jim Chalmers at Paperchain Bookshop for the launch of Glory daze : how a world-beating nation got so down on itself / Jim Chalmers.
Posted by Eric Pozza at 10:12 pm