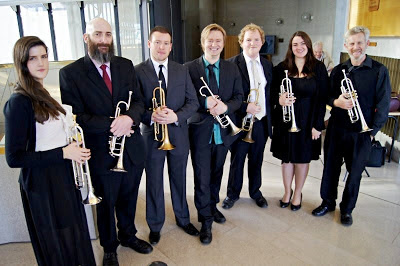 The Trumpet Club had me thinking of fanfares. Everyone loves a fanfare. I can’t help but think of Errol Flynn and Robin Hood and jousts when I think of massed brass. It’s such a wonderfully majestic and noble sound: big and brassy and celebratory and with such pure tonality. When I process recordings of brass, I notice a clear, simple image of the sound which must indicate a relatively simple sine curve and uncomplicated harmonic structure. Remember the long, straight trumpets of the mediaeval sagas?

The Trumpet Club are just that - trumpets - although they use modern, bent, piston models. They’ve got sick of waiting and counting at rehearsals and performances, so they’ve formed a trumpet-only group to play classical, jazz, blues, originals, whatever. Members are from the CSO and jazz school and local teachers and experienced students. These are capable players and they speak with billowy low notes and clear high notes and sharp harmonies. Trumpets can be luscious with good chops behind them, and especially with a good acoustic. They were. TC started at the top of the High Court ramp, as have several other performers, with the most fanfarish piece of the repertoire, by American Eric Ewazen, but then arranged themselves downstairs to play a lively Telemann and a heart-on-sleve Percy Grainger Bonnie Doone. Then two modern pieces. Firstly, Mike D’Ambrosio’s Ice Town, all spikey and dissonant, telling the story of a town caught in a severe ice storm. Then Suite for six trumpets by Dennis Horton. This is a work in three movements with a nicely modern vibrancy: firstly news themish, then soft and golden with rich harmonies forming from moving lines, then film action or thriller. These two pieces were my favourites. The music was mostly scored, but Cam did solo on the following piece, Bourbon Street breakdown, with bass-like ostinato and chordal accompaniment from the others. Then, to finish, a bit of chop-challenging corn, Rakes of mallow, all cute melody and unrelenting accellerando. I’m not sure why, but it always seems to me that brass players have a good sense of humour, although maybe more in the classical scene. There’s a certain desperation in counting bars.

This was their first concert and they were building their chops (no sitting back here). It was wonderfully well received and surprisingly more quiet than I’d expected. There were some noble sounds, but also just plain vibrant. I think the Club can be bigger, but on the day Trumpet Club were Zach Raffan, Cameron Smith, Corey Booth, Kevin Knapp, Louisa Batts, Kate Walker and Greg Stenning (trumpets)
Posted by Eric Pozza at 7:57 pm