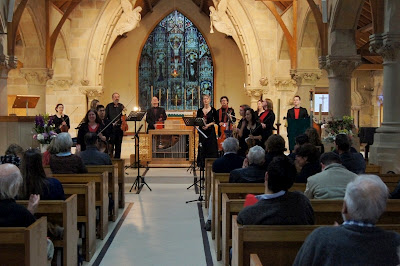 Period or not is surrounding me at the moment. I heard Limestone Consort on Sunday and they were playing with modern instruments, other than one viola d’amore. It was a strong and vibrant sound. Very different from Aust Haydn Ensemble, live, with their period instruments, and the CD that Asanka just lent me, of John Eliot Gardiner conducting the Beethoven symphonies with a period orchestra. The difference is dramatic but I remain open to either.

Limestone Consort is a local chamber orchestra. They are part of the All Saints family and I’ve written of them here before. They are another of the hidden gems of Canberra. They are a mix of young and old, and presumably professional and not. I know that Kyle is studying for his PhD on the Double Bass but Clara’s PhD is in the Physics Department. As for the others, some young ones might be schoolkids and at least one may be retired. This concert was dubbed Vivaldi’s Venice. Apparently they were seeking a theme to broaden the repertoire a little, so there was considerable Vivaldi but also Albinoni. I was stunned by the first confident notes that rang out from Vivaldi’s Concerto for strings in D. This is ordered music, formal, structured. The bows move evenly and the dynamic changes are simple and evident. I can imagine the Doge as well as the delectable and the witty and the gloriously presentable. This is not the music of German courts, but of warmer climes and an Italian vita delectosa. I was once in Venice for Martedi Grasso, the Carnevale, and I have etched on my mind one couple, richly dressed in period costume, elegant, dignified, formal, so much Venice and not the tourist throngs. This music is of that life. Vivaldi taught girls (perhaps illegitimate children of the aristocracy) as the Red Priest, so he wrote for female voices. We had several tunes for voices, alto Maartje Sevenster and soprano Veronica Milroy. They sang together for Laudamus te from Vivaldi’s Gloria and independently for Nulla in mundo pax sincera (Veronica) and the lengthy Nisi Dominus (Maartje). I loved the interplay of voices when they sang together, but also the beauty of individual voices and the dignity of ornamentation when they sang apart. I mentioned Albinoni and he was obvious when he was played. What is it that is so obviously Albinoni? Maybe it’s his harmonies or how they move. He was introduced as providing Bach with some melodies so he was respected in his day. I’ll also mention the sound of two other instruments. Firstly, the chamber organ played by Peter Hagen. This particular organ makes a common appearance at All Saints, and it’s a delightful, small, beautiful instrument that added a lustre to this music. Also, the viola d’amore, played by Ross Mitchell. It’s a period instrument, with seven playable strings and another seven resonating strings. I expect it’s a pain to tune. I found it lighter than a modern viola and more squeaky and I strained for resonances from those extra strings but you have to admit some (imagined?) authenticity.

Limestone Consort is a wonderful local chamber orchestra with a wide repertoire: this time, Vivaldi and Albinoni; last time Mendelssohn, Sibelius, Bottesini and Holst. I enjoyed this concert immensely. Their next is not till November, with a guest leader from ACO2. It’s not a busy concert schedule, but it’s worthy and well played. A local gem.