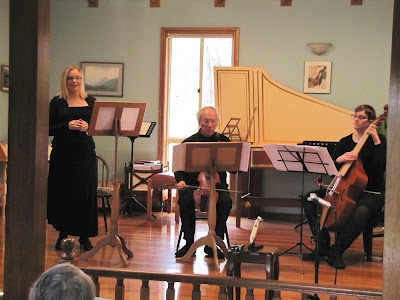 It’s quite strange to go to the Australian bush with gums appearing through the window to hear early music. Bush Baroque is an early music quartet, all viols and little organs and harpsichords and recorders. This concert was a charity performance in the music room of the home of the two leaders, Richard and Joan Milner. It’s literally a drive past the dam wall and through the eucalypts and take care for kangaroos. Nothing like the world of Guerrera and Byrd and Buxtehude and Telemann. Or of Godfrey Finger (that’s a new composer for me) or Bach, although they did perform a few songs by David Yardley, our extant local with a mediaeval musical bent. It seems strange, but the tunes I recognised, other than Well Tempered Clavier, were by David. So, it’s all a perplexing disjunction of era and geography, but beautiful music none-the-less. 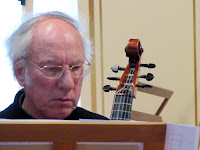 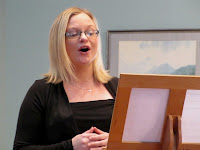 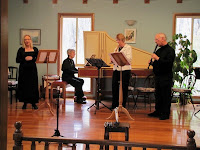 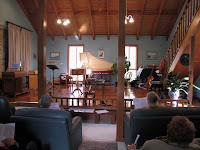 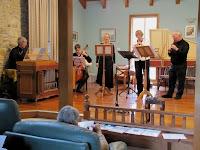 The performers changed liberally for different tunes. Bush Baroque comprises Richard Milner, Joan Milner, Sylvia Shanahan and Rachel Walker, playing variously keyboards, recorders and viols. On the day they welcomed Emma Griffiths (soprano) for the songs and Owen Bingham for an additional bass viol. A trio started with a prelude from Bach’s Well Tempered Clavier and a sonata from Bellinzani, played on recorders and organ. Then Emma Griffiths with three viols for two motets by Guerrero, and four viols for fantasies by Coprario and Byrd and then Emma again with two viols for two songs from David Yardley. These may be recent (they are original lyrics put to modern music in mediaeval style by David Yardley) but they are memorable and true to form. Then the second half of a Buxtehude cantata from Emma with organ and two viols, a Finger sonata on harpsichord and two recorders and a Telemann cantata sung by Emma with harpsichord and two recorders. It’s beautiful music with passages passing canonically and courtly, witty, often pious presence and the olde tones of small organ and harpsichord and recorder and the frequent sound of tuning viols. I imagine stone halls or cathedrals, or perhaps rousing drinkers although not so much in this program. All strange for the circumstances of a house in the Aussie bush, but at least to finish, with a raffle for CDs and local wines on the deck, it felt right. But then, Canberra is a wonderful place of diverse interests and it is the bush capital, so what’s out of place? An afternoon of mediaeval viols and heavenly, embellished soprano is a thing of beauty and pleasure. Baroque in the bush is another satisfying and surprising local discovery.