Anything but not everything 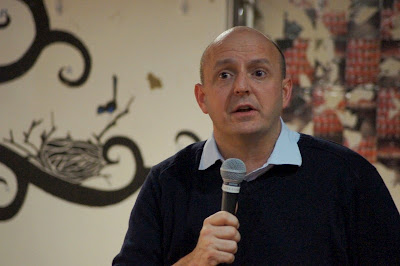 I found Richard Dennis speaking at the ANU Politics in the Pub was refreshing. It was not just the free jugs of beer on the tables although they were welcomed (mmm, dark ale). This was a realistic but positive response to cool cynicism, and that’s very refreshing. I could tell the story through quotes because Richard was very quotable. About politicians, he said “if they weren’t speaking on behalf of someone, they wouldn’t be there” meaning they are representatives and if you don’t make claims on your representative you won’t have influence. About voting and the potential 1.2 million youth votes (of which 500K are not enrolled and 250K have no intention to enrol; from recent Australia Institute research) “vote for the party [you] hate the least” because “regardless of whether you vote, there will be a government and there will be a budget”.

The government and the budget are the mechanisms for decision-making in Australian society. How we allocate the Commonwealth budget of $350b determines our society. We don’t have enough money to do everything, but we do have enough money to do anything. We will spend $50b for 12 subs to replace 6 subs we’ve never used and another $40b for 100 JSF fighter planes, but $2b was recently taken from universities. Australia is a rich country with low tax (the message that Australia as high taxing is not true, but that’s another story). If our tax rates were still at 2006 levels, we would be $170b better off (over the period, I guess) and the top 10% got more of these tax reductions than the other 90% combined. “Tax is the price we pay for a civilised society”. Australia is rich and it’s great to live in a rich country. Our GDP is doubling every 20 years (but still we can’t do everything). As individuals, if we do nothing, influence will win. The numbers are closer than you think. Apparently Simon Sheik (Greens candidate for the Senate for ACT for the coming election) says that at the last ACT election, the Liberals just scraped in with one quota plus 33 votes (!). For Simon and the Greens, it’s that close. Politicians are rational; they respond to voters who have power over them. “The small organised group always wins”. Pollies enter with good intentions and even maintain them, but the system of power and influence and promotions naturally corrupts good intentions. Richard suggested limited terms for pollies (take an arbitrary number, say 2 or 3 terms). Being a pollie is “a really tough job” and he admires people taking it on, but do electorates benefit from lifers? Politics should not be a career path; time spent is corrupting. He’d like to see politicians managing expectations better: “speaking frankly more often would do everyone a favour”. Australians can accept difficult changes, even tax rises, when justified and argued. We’ve just welcomed a 0.5% tax rise as the Disability levy; even Abbott is promoting increased tax for business for his paid parental leave scheme. On the other hand, removal of subsidies is difficult but “bucketloads of cash would be available”. He mentioned the coal industry. Some numbers about coal production are stunners as well as amusing. Australia mined 400m tons of coal in 2012. One year of Australia’s coal production as a 1m x 1m stream would reach to the Moon. We plan to mine double that in coming decades (the climate change implications are alarming). We gave $4.5b subsidies to coal industries in 2012. (Facts are important as well as often scary). And he got on to Superannuation, that topic of interest for baby boomers (conflict of interest alert: I’m one). We spent $35b (presumably pa, 2012) on tax concessions to Super, of which $10b went to the wealthiest 5% and none went to the bottom 10%. This is refreshing information and discussion to me. This is politics as distribution and economic choices, not just identity and the personal. I despair that the Left loses itself in identity matters while wealth is ever more unequal. I’m old fashioned, but wealth and climate change are the keys to politics for me at this time, and serious involvement, even if just at the level of being informed and voting, is both a duty and a sometimes disheartening joy for the citizen. I found this session invigourating and just a bit hopeful. Richard Dennis (Australia Institute and ANU adjunct associate professor) spoke at an ANU Politics in the Pub session in the ANU Bar.
Posted by Eric Pozza at 8:11 pm