Triumphs of the blessed 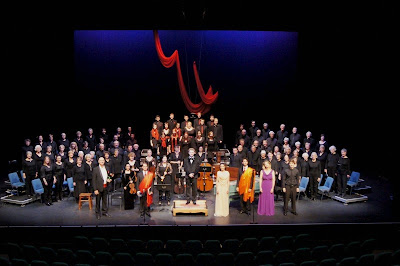 I was going to take this quote from Handel’s Theodora, “Pity suing / Mercy wooing” but Triumphs… seemed to fit. When I checked the libretto I found it’s actually “Triumph o’er her boasted chastity” but I’ll use Triumphs … anyway. I like it. 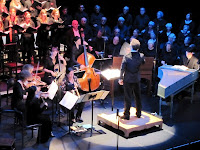 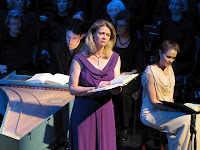 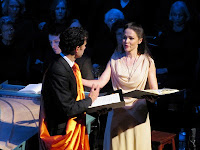 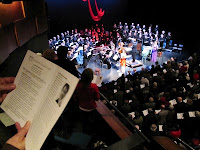 We saw a performance of Handel’s Theodora by the Canberra Choral Society with various guests and with period instruments. It’s dignified and neat and even touching later in the work, when the Theodora and Didymus, the Christian couple, are sentenced to death by Valens, President of Antioch. Didymus is a Roman soldier who’s fought with friend Septimius, but he’s fallen for the beauty of Theodora and converted for her purity. Valens has declared that all citizens should offer sacrifice to some Roman goddesses to honour Diocletian's birthday. Theodora refuses and is sentenced to a brothel. Didymus goes to Theodora and allows her to escape in his uniform and helmet. Didymus is sentenced to death. Theodora returns, they each offer their own death to save the other and of course they are both sentenced. It’s all strange classical stories which mean so little to us these days and stories of saints and worthy Christians suffering at the hands of heathens and that goes over my head. This performance was a one-off. It felt it started a bit unsteadily, although it was comfortable by the end. The voices were very satisfying, and I could follow most of the story other than Theodora’s words. Soprano training is like that and it’s a weakness when there’s a story like this to follow. I loved the CCS when they sang, all rich and full and smooth, but they were the Christian chorus, after all. Kampactus was the chorus of heathens who chuckled at the promised rape of the pure Theodora and they seemed to have some more intricate lines to sing. I lost a few. I also didn’t particularly notice the period instruments other than the baroque oboe and harpsichord and chamber organ. I assume the strings were gut and perhaps the violins were milder, but I didn’t find it particularly noticeable. I particularly watched cello and bass, partly for the different physical approaches to the instruments: cello is more lightly strung and Anthea attacked it with raised fingers; Helen on double bass was smoother and seemed to be natively conserving her strength given its heftier demands. I admired both their playing. The whole ensemble was warmed up by the end and the end also has some of the best music: the final duo of the lovers and a choral segment that finishes it off. A worthy and satisfying finale.

The musicians did a great job, even if I would have preferred to hear it after half-a-dozen more performances. Oh, and the audience sang. CCS apparently has a habit of introducing singalongs. This time is was three lines of a hymn over four bars that were repeated. The words and music were in the program; the lights came up, we stood and sang, everyone smiled, and we sat down. Nice twist and nice work.