Calling it a day 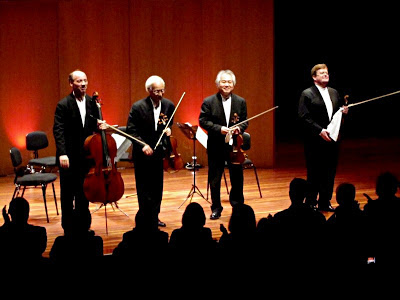 It was the last tour for a venerable Tokyo String Quartet. They were once again touring for Musica Viva and performing in our Llewellyn Hall. We got program no.2 which was perhaps the tamer of the two: Sculthorpe, Mozart and Schubert. The sound of a string quartet was pretty small for such a large space – it is a chamber format, after all, and that is a very large chambre – but they filled it reasonably well. I can find strings alone a bit grating and this had elements of that, although only at times. And catching each of the lines was a struggle. The outliers were obvious enough – first violin was clear and individuated, as was the cello at the other end of the spectrum, but picking out viola and second violin was not so easy. Perhaps I shouldn’t have expected to: their roles are more harmonic and supportive. When I did notice the second violin, it was echoing the first, and I realised its tone was spectacularly different. Otherwise, I enjoyed the tonal variation of different instruments as they played unison or in harmony, usually in support of the first violin: cello/viola was common, or viola/2nd violin or maybe both with cello. But it was surprising how often the cello had a significant part, too. This was not just a bass accompaniment. Perhaps by nature or perhaps by youth, the first violin and cello were prominent and firmer. But this is a moderate quartet: no particular hype or front. A pleasant chat and quick entrances and exits. They let the music speak.

The first set was Sculthorpe String Quartet no.16. It has bird sounds (glissandoed cello harmonics on three strings) then expanses that spoke to me of sea and maybe country. The program says it’s a response to asylum seekers and that it freely using an ancient Afghani love chant and responds to loneliness, anguish, yearning and dreams of a free-life. Then a lighter piece with classical formality, Mozart String Quartet no.20 in D major (Hoffmeister) with a sonata-form first movement, followed by Minuet, slow adagio and lively allegro movements, all sweet with charming melody. Schubert String Quartet no,15 in G major followed the interval. This is four movements that have drama and recurrent themes and considerable variation and complexity demanding concentration, but there’s a feel of brilliant society distance about it, spoken of in the notes as “within the gilt frame of the historical bourgeois ‘Biedermeier’ character of his time”. This is intelligent and demanding music with calm and social graces.