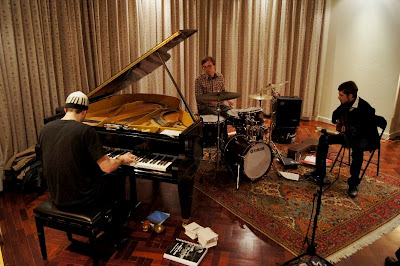 Congratulations to the Austrian Embassy for hosting such a challenging and unrelenting outfit. The David Helbock Trio was in Australia for various festivals including Melbourne. A few local music and jazz afficionados attended this gig and mixed with some of the local diplomats. I can’t imagine this is standard fare at private embassy parties, but, as Megan reminded me, these are an intelligent and informed group that deal professionally with different experiences, so we shouldn’t be surprised.

David’s band was challenging from the first swipes over piano strings under the lid and the subsequent morphing into a driving groove. This was loud and sustained, frequently dissonant, very busy for all three performers. It was sometimes exploratory in sound, especially with the open piano lid and various tools laid on strings that changed standard piano to synth-like tones. I was recording and worried about levels given the unexpected intensity and volume of it all (in the end, I got a perfectly good recording; listen for it on ArtSound Friday Night Live). I said unrelenting above, and busy. There was a level of din that was both overwhelming and fascinating and sometimes tiring. It’s not quite true as David also played a solo piano piece and this was far softer in both volume and intent. But otherwise it was insistent even when volume was reduced, for a bass solo or a sudden stop and restart. David played some tunes from his on Personal Real Book, an exercise for which he wrote a tune a day for a year. I perused this, and it’s more than just a set of tunes although the content page lists each day’s date as a title. It includes thoughts and study suggestions that make it a diary and study aid and more. Interesting. Some of the melodies were etude-like; others were contorted and dot-rich with a few chords below; plenty had two lines, for two piano hands or bass and melody parts.
This was a piano trio, so piano, bass and drums, but it didn’t look it. Here the bass was bass ukulele. I’d seen them on sale and advertised (produced by Kala in California), but never heard one or felt one. It had a very short scale, thick and flabby silicon strings, tuned like a 4-string bass over a lined fretless neck. It’s an unusual sound, too, but surprisingly effective: pudgy and punchy, short sustain, a strange top edge, but mostly big middle, and so quick to play. I picked it up later and the dig-in strings and tiny one-octave neck was an invitation to speed. This was lots of fun and a surprisingly useable instrument. Raphael took great advantage, playing with fingers, thumb, shredding some impossible unison lines with piano. It’s partly for this unusual bass sound and partly for the relentlessness and dissonance that I thought of Jason Moran. Herbert did his part, to, as busy and mobile, taking several solo, but also laying on some rich samba and jazz rhythms. I noted a fine-sounding ride, but I heard mainly hefty tom-driven feels.

The whole was powerful and a bit rough around the edges. It’s better that way. Energy like this needs some edge of anarchy, although the charts with lots of dots were anything but anarchic. At least the samba was surprisingly simple in harmony while being rich in rhythmic energy. The non-originals were a few Monk pieces. One was pretty full on, but Panonica was edgy in interpretation and interplay but gentler in tone.

We were invited to an informal event, but embassies are never so informal. The music may have appeared that informal, and the performers definitely looked it, but this was complex and informed music. Thanks and congrats again to Embassy and trio. David Helbock (piano) led his trio with Raphael Preuschl (bass ukulele) and Herbert Pirker (drums) at the Austrian Embassy.
Posted by Eric Pozza at 10:17 pm