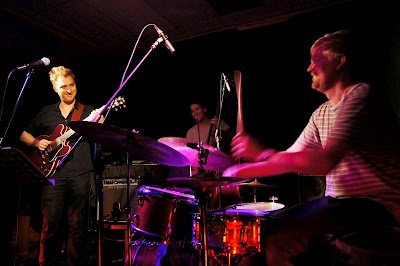 Well, it’s a guitar band so you expect some volume and an excitable audience. We got both for James Muller at Smiths. I was not the only one who arrived early. This was James, our Aussie-International, playing with Alex Boneham and Ben Vanderwal. This is a hot trio and the room was well populated 30 minutes before start time. I arrived and they were doing a sound check, and it was loose but furious. It just got better through the night. This was the hottest chops played for fun and amusement and just a bit on edge. I noticed a few slips, inevitable with three guys going for it, and some chuckles and knowing smiles were proof. The solos passed around with some informality and they were all to die for. I was amused by the tune, Mitch, a dedication to Hendrix’ drummer, Mitch Mitchell, that started with a strangely heavy and simple beat from Ben with perfect blues guitar over, a veritable contemporary update on the best of Hendrix. And there was an authentic jazz ballad, Embraceable you, which was swung and felt a little out of place, but was a proof of the jazz heritage.

James played guitar of the jazz greats, a work of stunning flexibility and interpretation. Jazz was quoted elsewhere, but with more an abandoned, rocky take. Diddums (yeah, I kid you not) was a take on Giant Steps (!) with the changes featuring in a solo in the middle, but flanked with a hot unison melody that responded to the original. Sonny Rollins’ Freedom suite First movement started the concert and it was demanding and forceful. Players at this level don’t seem to need much warm-up, but still they just got better as the night wore on. The final tune was another blues, hot and a throwaway with plenty of solos on show. James is a master. Mellifluous, inventive, fast, using mostly using pick and perhaps one finger and just occasionally fingerpicking. He had a collection of effects pedals, but nothing was flashy except the stunning playing. There was colour from the floor, but little more. Ben had the same subtle concern with tone. He’d continually change sticks or brushes or mallets, damp skins, even dull a cymbal with a clamp and he did it all amongst his urgent and wonderfully varied playing so no one missed a beat. Alex always works the strings but this was more so, hard and committed and fluent, playing the full range. I noticed lots of long paired seconds sequencing up and down the neck, jumps and thumbs and rock-infused even beats. I was close and could watch entranced at James’ fluency and inventiveness and the ease of it all. Guitar is not played hard; at this level (it should be so at any level, but often it’s not) it’s precise and controlled fingering and this was a lesson. Consonant or not, this was a display of craft at a stunning level. Firm, always fluent, occasionally fluffed because he was going for it and a bit under the weather. I tend to concentrate on one or a few players at a gig: those having a good day or with the most chops or authenticity, but I noticed I was entranced by each player as I concentrated on him. Guitar, bass, drums: all stunners. Get the drift? This was hot and I was not the only one impressed. A blow and a blowout. See them if you possibly can.

James Muller (guitar) led his trio with Alex Boneham (bass) and Ben Vanderwal (drums) at Smiths and it was a blast.
Posted by Eric Pozza at 3:00 pm