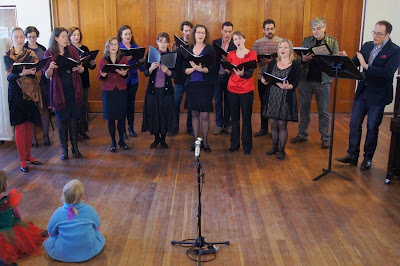 Coro are a great local choir, so it’s a thrill to sing with them … even if only for a sing-along. Coro staged a party-cum-concert for Christmas in July, complete with gambolling kids, mulled wine and fruit mince pies. All lovely. The singing was great, too, and not just from the choir. The audience was the best I’ve heard at a sing-along: confident, well pitched and timed. Such is an audience that attends a Coro concert, it seems. It was a mix of music that they performed, in style if not in theme. There were some carols which demanded considerable attention - more than was available from the littlest kids. Perhaps this was optimistic, singing restrained songs like Bethlehem down or Corpus Christi Carol or Little road to Bethlehem. I made a recording with coo-ing kids, but it seems strangely apt for a Christmas event. On the other hand, I was impressed by some older kids sitting legs crossed and concentrated. Other songs were more forceful, unaffected by playing kids. The Twelve days of Christmas with that humourous patter of unsuccessfully exchanged gifts brought a great laugh and those several sing-alongs were louder than any little kids: Good king Wenceslas and Deck the hall and Hark the Herald angels sing and Come all ye faithful. These are all old favourites. I enjoyed this more than most Christmas singalongs for two reasons: firstly the decent fellow singers, but secondly because the keys just seemed so right. I've sung carols where I strain to reach high notes, but not this time. These were just right; only one strained note for my limited voice. Also interesting was the take on Good King Wenceslas with the combined and male and female choruses. How different these lines sound, just unison, but high and pure for the females and solid and corporeal for the males. Quite a realisation. Then a piece of musical intellectual playfulness with pianist Anthony Smith playing Good King Wenceslas in the style of Bartok. There was mingling and conversation and three choral sets and voices that never seemed to stress on the high notes and some featured compositions and the inevitable Bach. It may be just a local church hall and some wine and song and the spirit of Christmas. But it was a wonderful pleasure and a beautiful choral performance and a decent sing-along to boot. Coro's next performance is a blend of Bach and Part Magnificats. What a town that has such people in't! 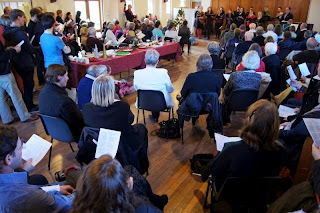