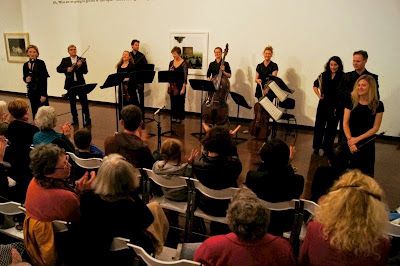 The first work played by the Australian Haydn Ensemble in the Drill Hall Gallery was Boccherini and I was thinking this was delightful music, with lively first and racing 4/4 third movement sandwiching a lyrical pastorale. The double bass is odd with a string quartet, but apparently there were some excellent bassists in the local courts when he was writing this work. Then a Hadyn divertimento amplified by Wranitzky. Amplification and reduction was a technique of editing existing chamber works for different collections of voices. Here, Wranitzky has amplified Haydn's string quartet for a nonet and changed the colour by adding wind instruments: flute, oboe and horns. It's a civilised work giving much pleasure, as a divertimento should be. Quite lovely, and much richer for the wider instrumental colour. The third work was Haydn again, this time a concerto for two lira organizzatas (lire organizzati?). The lira organizzata is related to the hurdy-gurdy and listed in French-language Wikipedia under Vielle organisé. Apparently, the remaining instruments are unplayable and in museums. Music for the lira organizzata is usually performed on a pairing of oboe and flute, as this was. They would sometimes converse, and sometimes speak in unison. Again, a courtly work, lively and warm. But then the theme of the evening: Mozart's musical joke. It's Mozart, so obviously brilliant, but also it's odd and misbehaving and blatantly unconventional. It's replete with musical humour. The program lists some: "wrong notes, irregular phrase lengths, faulty harmonic progressions, clumsy ornaments, difficult and unidiomatic instrumental writing, poorly matched melodic ideas, the ever-scorned consecutive fifths and octaves between voices, shockingly subtle (and not-so-subtle) dissonances as well as pure, unbridled polytonality". Many of these are conventions rather than errors, and acceptable to our ears after the 20th century, but some were unmissable and belly-laughable. It's work of the genius and slightly noisome character of Mozart mythology, but what a clever invention and truly worthy of a few laughs. As for the performers, they were great. I loved the slinky performance of Paul with his high notes and dismissive slurs in several pieces. Jacqueline's bass was immensely capable: I am a fan. I enjoyed the occasional smiles of joy and communication from Sky and others. The horns were visitors and rang with resplendent baroque beauty. Listening back to a recording, I'm immensely pleased and even surprised by how well they played. The space could be muddy, but they did these works proud. Lovely, stately music, even despite Mozart's genius humour. AHE return for two more concerts this year as ensemble in residence at the ANU School of Music and they are recommended but perhaps already sold out.