Another take on a guitar band 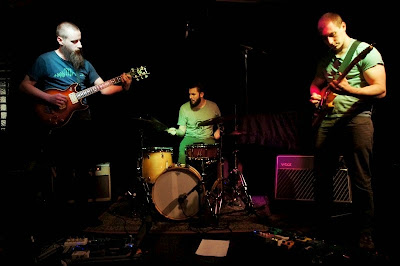 I like jazz that's exploring new combinations. This was the Adelaide band, yeahyeahabsolutelynoway!, and the lineup was guitar, guitar and drums. There are new sounds possible when you drop sax or piano or (as a bassist, I dread the thought) bass. I'd heard this combination once before from The Alcohotlicks, but I remember their music as more outgoing, rocky, blazing. Yeahyeahabsolutelynoway had elements of blues and rock and a few tunes were strongly so, but there was also psychedelia and effects. Both guitarists, leader James and Sam, had panels of effects at their feet. I joked with James that his effects cost more than his guitar. No doubt they did; effects are not cheap and they add up. But they used them nicely, subtly, just occasionally ending with looped noises and the like. But any guitar band will have rock influences and they were there. The drums were mostly playing rock rhythms, sometimes with stubborn simplicity and sometimes with jazz colours or abstruse or jerky crossing rhythms.

Some tunes were straight blues-drenched, licks and minor pentatonics, other spoke with rock chords. The melodies were insistent, played with clear, simple, unsustained tone, and sometimes the solos were similar, lyrical, but there were others with screeds of notes, especially from James. I thought the guitars worked well together, and the whole band felt comfortable and moved through transitions very neatly. If I heard right, they've been playing weekly in Adelaide for years and the regular performance shows in their ease together. Their tunes were originals, by James or Sam, and mostly from the album they are releasing on this tour. The band's got a strange name, but so have the songs: (Believe in the) monocause, Perfect day for Bananafish (literary reference), Perks of being a wallflower. Down home was perhaps the most bluesy of the set with its steady underlying minor riff. Why sheep (did I catch the name right?) was more floating and effected. Bananafish was effected guitars leading to a drum solo and a heavy rock end and decaying to looped noise. Shetland dream 1983 was, well, dreamy, mostly sparse solo guitar with echo. Bad day for the butter was a great title and also a 3/4 with hits on 1-2 leading into an frenzied accompanied drum solo and sudden stop. Yes yes was a double time four with an anticipated guitar chord. Jesus incorporated was a pretty 6/8 with the most jazz-like chording of the night. The audience was too small, but yeahyeahabsolutelynoway! was well received for their attractive music with openness and a fresh sound and their clear references to rock and blues. Much enjoyed, and very nicely developed.

yeahyeahabsolutelynoway! are James Brown (guitar), Sam Cagney (guitar) and Stephen Neville (drums) and they played at Smiths on tour from Adelaide.
Posted by Eric Pozza at 3:45 pm