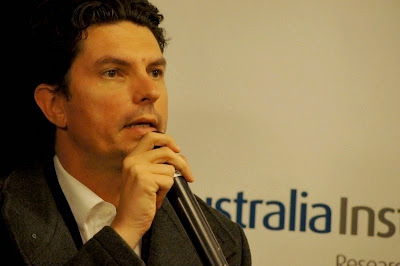 Scott Ludlam spoke at the Australia Institute’s Politics in the Pub. The topic was the new Senate and its challenges, but of course this goes broader, to the nature of politics in Australia today. One line of thought that felt right to me was his analysis of the Abbott Government as not so much ideological (easier to respond to because more consistent) as captured by a branch of society, here the big industries and a certain media empire. As evidence, he noted that the government is instituting IPA reforms, but ignoring some libertarian suggestions such as data collection and internet monitoring, and implementing some outlying conservative changes, not least knights and dames. This leads to a volatile, tumultuous period in Australian politics. Changes are sudden, eg, funding for public transport projects is suddenly removed and roads supported (strange, this). Scott joked that “every child gets a freeway under this government” but noted more ominously that decisions are being made outside the independent expert guidance of Infrastructure Australia. He also stated that three transport companies had donated $1.8b (yes, billion) since 1998 to the Libs. But there’s hope. The government doesn’t appear to be tactically smart and they are clearly in trouble with serious fights on multiple fronts. The standard political response is to change the subject; MH370, Iraq/Syria, the ongoing saga of refugees all serve. The small and conflicting media environment also helps, eg, changes that assist one media empire may damage another. The budget was “appalling and hostile” (I can only agree) and will lead to an “immense increase in homeless people”. He argued for building a movement, supporting many voices, looking beyond the next election. He noted the latest requirement that asylum seekers must prove >50% chance of torture/murder (not sure of the terms here) to avoid being returned and he expressed the concern and frustration of many: “God help us, we should be able to do better than this”. He argued that there’s “cynical manipulation of a market” noting that “you can eliminate your fuel bill for the rest of time [with renewables]”, but that “Abbott is a unifier” as he causes so much angst in so many different communities. There was musing over Clive Palmer’s speech on the day, beside Al Gore. There was a question on factionalism in the Left, but he queried just what was meant by the Left these days. [I agree, but presumably from a different POV. I’m distressed by identity politics, as real as its issues are, replacing key political issues of wealth and power.] He spoke of having allies in business, at least from renewable industries. There’s lots of money to be made there, and this government is just protecting the dinosaurs. Delays will cost Australia (see Stern and Garnaut). [There’s endless frustration here. It’s not at all clever to build the biggest coal port in the world now or to prevent the rise of a new industry with no input costs (sun and wind are free) while subsidising the dinosaurs. And to deny science (which they do in essence if only hint at in words) is the path of folly: we won’t win in a battle against physics.] He mused on Clive Palmer as a tactician. He gave the argument for the Greens voting against indexation of petrol excise [a decision of idiocy in my view]. He touched on language around “occupied” for East Jerusalem and 18C. He talked of the TPP and other attempts at investor rights treaties and took heart in the previous failures and the delays this time around. He touched on Murdoch and phone tapping in the UK and suggested electoral reform would suit Lib/Lab but is unlikely at this time given it’s just opening another battlefield. [Too bad: here’s a good change lost while fighting for the bad].

He’s a good looking bloke with a touch of Pierce Brosnan and a celebrity of sorts and he’s got the confidence and nonchalance that goes with that territory, but he’s on the right track. I was not too taken by his style of argument but what he promoted was OK. We’ve all lost some confidence in government recently, but democracy requires trust and I don’t like the alternatives. Capture looks real enough to me. Ex-Liberal PMs are coming out on issues including foreign affairs, asylum seekers and climate change. This is a radical government, but radical for the benefit of the few while ignoring the truly existential crisis of climate change. This is a time of 1% politics that requires 99% response. In the meantime, God help us all.

Scott Ludlam (Greens senator) spoke at Politics in the Pub for the Australia Institute. PS, excuse the delay; Scott actually spoke on 26 June.
Posted by Eric Pozza at 5:21 pm